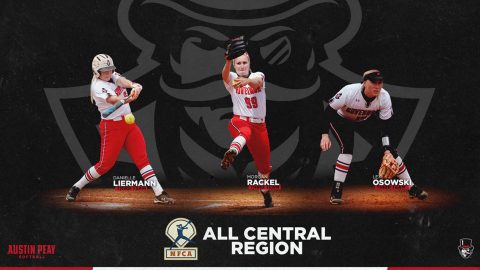 Seniors Danielle Liermann [1] (designated player/utility) and Morgan Rackel [2] (pitcher) along with freshman Lexi Osowski [3] (third base) were among the 39 student-athletes to earn the honor from the Central Region, which includes the states from The Carolinas to Texas, while overall, 392 student-athletes from across country were named to their respective NFCA All-Region Teams.

Liermann, a Simi Valley, Calif. native, finished the year batting .365, with a program single-season high in home runs (18) and RBIs (52), while earning First-Team All-Ohio Valley Conference honors and being an OVC Player of the Week selection twice.

Rackel, a Calgary, Alberta, Canada native, posted a 21-9 record this season, with six shutouts, two saves, a 1.93 ERA and 242 strikeouts in 199.2 innings pitched — earning All-OVC First-Team honors, as well as being selected OVC Pitcher of the Week (twice) and OVC Player of the Week.

She was also named to the Google Cloud Academic All-District ® Team.

Osowski, a San Diego, Calif. native, led the Govs this spring with a .387 batting average — a program record for batting average by an Austin Peay freshman – and a .463 on-base percentage, while recording 11 doubles and three home runs in earning All-OVC Second-Team and All-OVC Newcomer Team honors.

The award honors softball student-athletes from the Association’s 10 regions with first, second and third-team selections. NFCA member coaches from each respective region voted on the teams, and all the honorees now become eligible for selection to the 2019 NFCA Division I All-American squads.