Nashville Sounds fall at home to Round Rock Express, 11-5

Nashville, TN – The Nashville Sounds lost 11-5 on Saturday night against the Round Rock Express at First Tennessee Park. It was the Sounds first lost game of a six-game series. The Express offense was hot, hitting four home runs off Nashville pitchers.

Garrett Stubbs hit a two-run home run to get Round Rock on the board first in the third inning.

Zack Granite hit a triple in the bottom half of the third and scored on a passed ball to give the Sounds their first run of the game. 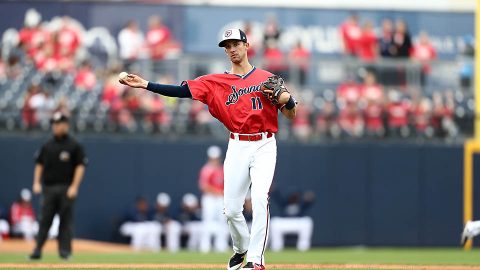 Round Rock scored five runs in the top of the fourth. AJ Reed hit a two-run homer. Taylor Jones doubled and scored on a Nick Tanielu single. The Sounds would walk in three more runs to extend the Express lead 7-1.

The Sounds scored one in the fourth when Nolan Fontana reached on a fielder’s choice to score Andy Ibanez. It was still 7-2, Round Rock.

Nashville continued to crawl back in the fifth with two more runs. Eli White hit a triple down the left field line that scored Scott Heineman. White would score on a Matt Davidson ground out to cut the Round Rock lead 7-4.

The Express continued to hit as they led off the sixth with back-to-back home runs by Alex De Goti and Kyle Tucker. Reed would get another RBI on a single and he would score on a Taylor Jones double to give Round Rock the 11-4 lead.

White made some noise for Nashville when he hit a solo home run in the bottom of the seventh but that is all the Sounds would get as they lost 11-5 to Round Rock.

Zack Granite and Eli White tripled tonight, give Nashville their first game with multiple triples in one game.

Tomorrow’s game will be the first night game on a Sunday this season for the Nashville Sounds. With first pitch at 6:35pm, Nashville right-hander Phillips Valdez (0-6, 5.50) will face off against Round Rock Express right-hander Rogelio Armenteros (1-3, 4.91).