Pasadena, CA – NASA’s newest carbon dioxide-measuring mission to launch into space, the Orbiting Carbon Observatory-3 (OCO-3), has seen the light. From its perch on the International Space Station, OCO-3 captured its first glimpses of sunlight reflected by Earth’s surface on June 25th, 2019.

Just weeks later, the OCO-3 team was able to make its first determinations of carbon dioxide and solar-induced fluorescence – the “glow” that plants emit from photosynthesis, a process that includes the capture of carbon from the atmosphere. 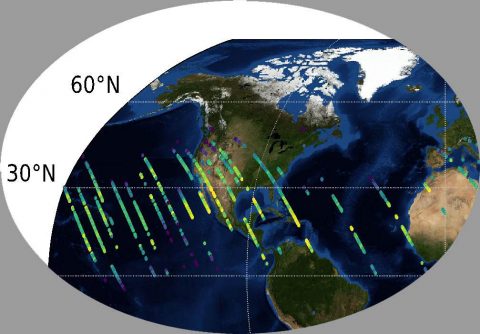 These initial measurements are consistent with measurements taken by OCO-3’s older sibling, OCO-2, over the same area – meaning that even though OCO-3’s instrument calibration is not yet complete, it is right on track to continue its (currently still operational) predecessor’s data record.

OCO-3 was also able to make its first measurements of solar-induced fluorescence. 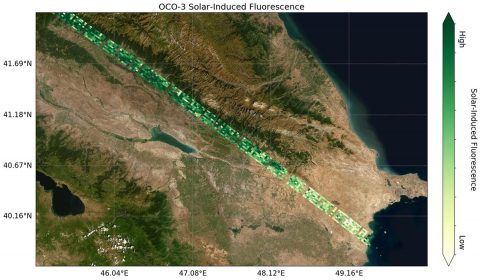 As expected, there is significant contrast in plant activity from areas of low vegetation near the Caspian Sea to the forests and farms north and east of the Mingachevir Reservoir (near the center of the image).

“The team is so excited to see how well OCO-3 is performing,” said Project Scientist Annmarie Eldering, who is based at NASA’s Jet Propulsion Laboratory in Pasadena, California. “These preliminary carbon dioxide and solar-induced fluorescence retrievals look fantastic and will only improve as calibration improves.”

OCO-3 launched to the space station on May 4. Although one of its main objectives is to continue the five-year data record started by OCO-2, it has two unique capabilities. First, OCO-3 is equipped with a new pointing mirror assembly that will allow scientists to map local variations in carbon dioxide from space more completely than can be achieved by OCO-2.

OCO-3’s data will complement data from two other Earth-observing missions aboard the space station – ECOSTRESS, which measures temperature stress and water use by plants, and GEDI, which assesses the amount of above-ground organic plant material present particularly in forests. The combined data from all of these instruments will give scientists both an unprecedented level of detail about how plants around the globe are responding to changes in climate and a more complete understanding of the carbon cycle.

The mission team expects to complete OCO-3’s in-orbit checkout phase – the period where they ensure all instruments and components are working and calibrated correctly – next month. They are scheduled to release official carbon dioxide and solar-induced fluorescence data to the science community a year later; however, given the quality of the measurements that OCO-3 is already making, the data will likely be available sooner.

The OCO-3 project is managed by JPL. Caltech manages JPL for NASA.