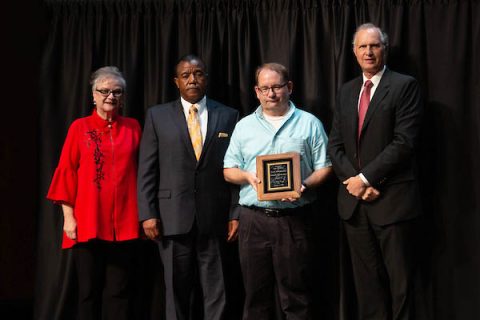 During his career at Austin Peay, Pitts has worked closely with several undergraduate and graduate students, resulting in 18 scientific presentations. He served as president of the Tennessee Academy of Science and as a member of several committees for the Human Anatomy and Physiology Society.

Pitts also has earned 15 grants totaling more than $740,000 to purchase equipment for his biology students.

On Wednesday, the University presented three tenure-track faculty members with the Socrates Award for Excellence in Teaching, which recognizes professors who are known around campus for their ability to inspire and motivate students. This year’s recipients were McLean Fahnestock, assistant professor of art and design; Dr. Mollie Cashner, associate professor of biology; and Dr. Kathryn Woods, associate professor of leadership and organizational administration. 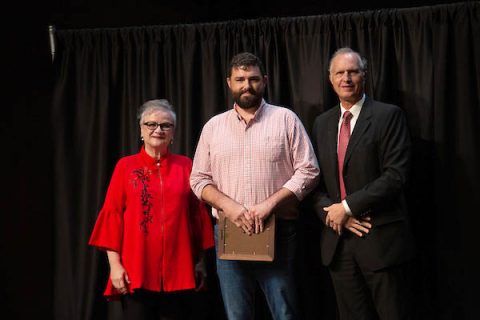 The University’s Richard M. Hawkins Award, presented each year to a faculty member who has demonstrated exceptional scholarly and creative behavior, was presented to Dr. Dwayne Estes, professor of biology.

In 2017, he launched the Southeastern Grasslands Initiative at Austin Peay, and through that organization he has successfully developed a plan involving state, federal and private entities to fund research and preservation of native grasslands. As a result of his efforts, the Tennessee Wildlife Federation awarded him its coveted “Conservationist of the Year” award.

Each year, the Distinguished Community Service Award recognizes a full-time faculty member whose service has enhanced or will enhance the quality of life in the Clarksville-Montgomery County area. Dr. Jill Eichhorn, associate professor of English and coordinator of the Women’s and Gender Studies Program, received this year’s honor. 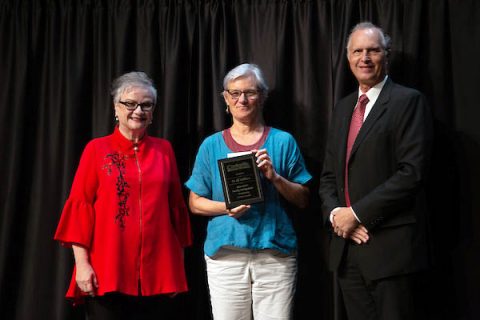 Eichhorn also has coordinated performances of the Vagina Monologues for 18 years, raising more than $20,000 for organizations such as Clarksville’s Sexual Assault Center, the Legal Aid Society of Middle Tennessee and the Urban Ministries Safehouse.

For more information on these awards, contact the APSU Office of Academic Affairs at [2].