Clarksville, TN – In the fall of 1982, a 28-year-old photographer named Susan Bryant arrived at Austin Peay State University (APSU) as an assistant professor in the school’s Department of Art.

She was just a few years older than her students, but as she shared her passion for the art form with them, she inadvertently made several lifelong friends. 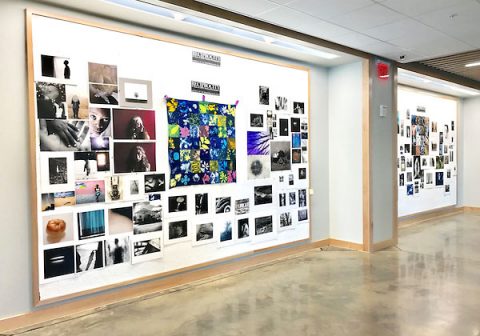 Thirty-seven years and some 4,000 students later, she remains in contact with many of the men and women who made use of Austin Peay State University’s photography dark room.

“Some of my best friends are former students,” she said.

In May, Bryant retired from the University, and as she prepared her work for an exhibition in Austin Peay State University’s The New Gallery – the show, “humanature: new works by Susan Bryant,” runs through September 20th – she felt nostalgic for all the talented students who’ve passed through her life.

To honor their work, Bryant decided to host a companion exhibit in the halls of the APSU Art + Design Building, just beyond the doors of The New Gallery. That show, “Reciprocity: 37 Years of APSU Student Photographers,” runs through September 13th.

“Teaching them had a huge impact on me, both as an educator and an artist,” she said. “Sharing my knowledge and experiences with them encouraged me to maintain an active, creative practice. The teacher-student relationship often shifted when they shared skills with me that I did not have. For me, being an educator, being a professor of art, meant that I was constantly learning. I can’t imagine a better way to make a living.”

Earlier this year, Bryant sent out a call for work, and she received around 400 photographs, representing more than 100 students who studied at Austin Peay State University between the years 1982 and 2019. On a recent afternoon, the retired professor lingered in front of the photographs now hanging on the first-floor walls of the APSU Art + Design Building.

Among the images was a panoramic color photo of a western U.S. landscape. The photograph was taken by Leigh Averitt, a 1992 Austin Peay State University graduate and winner of the APSU Center of Excellence for the Creative Arts’ 2019 Arts Education Ovation Award.

“Susan opened my eyes to the fact that beautiful images surround us, waiting to be framed and captured,” Averitt said. “I remember the slides she would show in class – Imogen Cunningham, Alfred Stieglitz, so many early image-makers that challenged and excited me. Using the skills she taught in the darkroom was like magic, an amalgam of chemistry and cooking it always seemed to me.”

Averitt went on to a career as a local high school art teacher, and for several years she taught a photography class using the skills she learned from Bryant.

“I always think of Susan as the person who made me aware of light, and once your eyes are opened to it, it’s impossible not to see beauty and complexity everywhere,” Averitt said. “She opened my eyes.”

Bryant will give a public lecture on her work at 6:00pm on September 12th, in the APSU Art + Design Building’s Heydel Hall. There will be a reception the following day, September 13th, from noon-1:00pm, and a gallery talk with Bryant beginning at 12:30pm. All events are free and open to the public.