Richmond, KY – In college football, winning a conference game on the road is never easy, and doing it in overtime is harder, but that’s exactly what the Austin Peay State University (APSU) football team did, knocking off Eastern Kentucky, 28-21, in overtime at Roy Kidd Stadium. 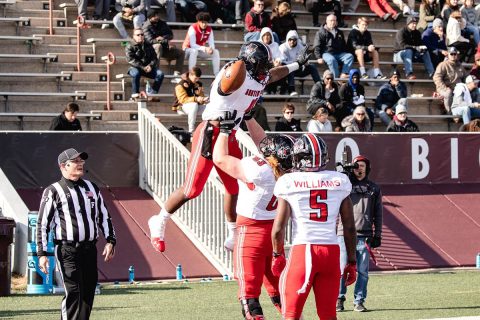 Mark Hudspeth [1] and Co. have learned to take a punch this season, but every time the Govs get hit in the mouth, they get up swinging even harder.

The APSU Governors fell behind early, and fought back to take the lead. Once the Govs had the lead, Eastern Kentucky came back to tie the game and force overtime.

The Govs lost the overtime coin toss. No problem; they would score on the first play of overtime, then stop the Colonels to secure the win. Eastern Kentucky landed some punches, but every time they did, the Governors had an answer.

Eastern Kentucky landed the first blow of the game, forcing a fumble less than a minute into the contest and turning it into a 7-0 lead. The Governors responded when DeAngelo Wilson [2] took a JaVaughn Craig [3] screen pass 49 yards for a touchdown to tie the score at 7.

Eastern Kentucky landed another shot, hitting a field goal on their next drive to take the lead, 10-7. This time it was the Governors defense that responded. Down three points with the offense struggling to move the ball in the second quarter, Kordell Jackson [4] came up with his sixth interception of the season.

Again, the Governors couldn’t turn the interception into points and went to the locker room trailing, 10-7.

With Eastern Kentucky driving, the Governor defense line did what it had done all game, and all season – pressure the quarterback. Then Colonel quarterback Parker McKinney, trying to escape the pressure from John Wesley Whiteside [7] and Shaun Whittinghill [8], threw an ill-advised pass right to Pat Walker [9] for the Govs third pick of the day. A 38-yard return gave the Governors the ball on the Eastern Kentucky 34.

Things changed after the Walker interception. APSU the final 34 yards in 2:22 seconds. Ahmad Tanner punched it in from the one yard line, the Govs had their first lead of the day with 4:17 left in the third quarter.

On the one, the Governors trotted out the jumbo package, with defensive tackle Josephus Smith [11] lined up at fullback. Craig took the snap and turned to hand off to Kentel Williams [12] who was following Smith, play action;, Craig pulled the ball and rolled right where he fired a touchdown pass to a wide open Prince Momodu [13]. Govs lead 21-10 with 13:09 left in the fourth.

But this one wasn’t over yet, the OVC’s leading rusher Daryl McCleskey broke a 52 yard run, before punching it in from nine yards out. The Colonels went for two and converted on double-reverse throwback to the quarterback, 21-18.

Austin Peay State University got the ball back and a bobbled snap on a punt attempt gave the Colonels the ball back with good field possession. The Governor defense stepped up again, holding Eastern Kentucky to a field goal with just under five minutes left in the game. Each team would have the ball once more, but with nobody able to put points on the board, the Govs were headed to their first overtime game since 2008.

Eastern Kentucky won the toss in overtime, meaning the Governors would have the ball first. On the first play of overtime, Kentel Williams [12] took a Craig screen pass to the house, untouched for the 25-yard touchdown. With the pressure squarely on the Colonels, the Governor defense took the field.

A second-down holding call moved Eastern Kentucky back to the 31 yard line. Then on third and 16, Smith and Whittinghill combined for a sack that would set up a fourth and 17 with the game on the line. The Eastern Kentucky pass on the final play fell incomplete, and the Govs picked up a huge OVC road-overtime win, 28-21. It was the Governors first overtime win since 2007.

The APSU Football win, along with UT Martin’s win over Jacksonville State, sets up a homecoming-battle for the Sgt. York Trophy and for first place in the OVC, next Saturday, at Fortera Stadium. UT Martin leads the conference at 5-1 in OVC play, the Govs sit right behind them at 3-1.

It’s all head coach Mark Hudspeth [1] and his team could ask for, control of their own destiny.