Birmingham, AL – In its final outing ahead of the 2020 Ohio Valley Conference Indoor Championships, the Austin Peay State University (APSU) track and field team got plenty of good work in at the Samford Bulldog Open. 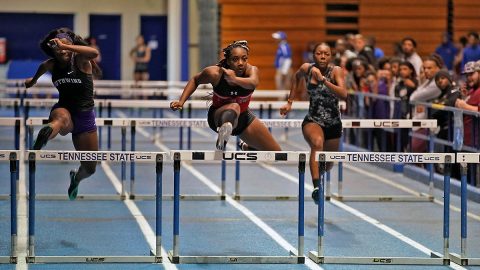 This meet closes out the regular season for the APSU Govs, and while it was not without its hiccups, it leaves head coach Valerie Brown [1] feeling good about where her squad is at heading into the championship.

“We had a good meet today,” Brown said. “We made a few minor mistakes that we’ll fix over the next week. It was a good opportunity to hopefully get the jitters out of the way this week.”

Late Friday, freshman Kenisha Phillips [2] once again proved to be the best at pretty much whatever she wanted to do; in the Friday twilight, it was the 200m dash, which Phillips won with a 24.41 mark. However, Murray State’s Norma Abdur-Rafia was close behind at 24.48. Sophomore Kyra Wilder [3] also posted a third-place showing in the event with a 24.74 mark.

The early parts of Saturday featured near-misses in relation to scoring position. Mikaela Smith [4] just missed out on a top-eight finish in the 800m run, with a 2:19.42 that placed her ninth. Kori McDaniel [5] also placed ninth in the weight throw (14.82m); she later took home an eighth-place showing in the shot put with a 12.72m throw.

In the pole vault, freshman Karlijn Schouten’s [9] season-best 3.80m mark placed her third and moved her closer to the league’s top spot; she stands a chance of unseating Belmont’s Tyra Finkeldey at the conference meet. Morgan Bradley [10] (3.35m) took home a share of eighth.

Walker won the 60m hurdles with a season-best 8.63 mark as the APSU Govs closed out strong late in the meet, winning two of the final three track events. Phillips and Wilder once again made a strong run in the 60m dash finals, with Phillips (7.53) taking fifth and Wilder (7.63) finishing seventh.

Phillips, Wilder, Sabrina Richman [11] and Allana Johnson [12] closed the meet with a 3:46.50 run to win the 4x400m relay, moving closer to overtaking Murray State for the league’s top spot.

“Lennex executed everything she did very well,” Brown said. “Our 4x400m group closed us out strong. Overall, we’re looking forward to taking the time to get our bodies and minds in the right place to execute at the conference championships.”

Alright, that’s the preamble. Eleven days from now, Austin Peay State University track and field begins its attempt at the 2020 OVC Indoor Track and Field Championships, right back in Alabama at the Birmingham Crossplex.