Nashville, TN – Tennessee Titans running back Derrick Henry finished 2019 with a league-high 1,540 yards on 303 rushing attempts (4.8 avg.). His 16 rushing touchdowns put him in a tie with Green Bay Packers’s Aaron Jones atop the league leaderboard and placed second in franchise annals. 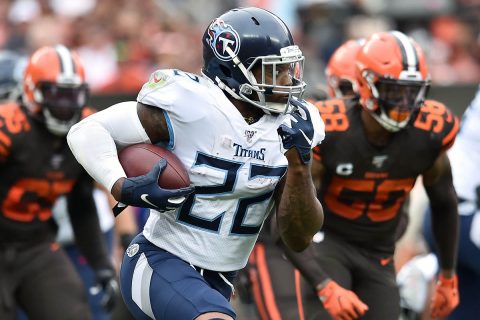 Tennessee Titans running back Derrick Henry (22) runs with the ball during the first half against the Cleveland Browns at FirstEnergy Stadium. (Ken Blaze-USA TODAY Sports)

From the regular season final through the divisional round, he became the first player in NFL history to rush for at least 180 yards in three consecutive regular season and/or postseason games.

In addition to being selected to his first Pro Bowl, Henry’s postseason honors included second-team Associated Press All-Pro recognition and the FedEx Ground Player of the Year award.