Washington, D.C. – NASA and SpaceX are targeting no earlier than October 23rd, 2020 for the first operational flight with astronauts of the Crew Dragon spacecraft and Falcon 9 rocket to the International Space Station as a part of the agency’s Commercial Crew Program. NASA’s SpaceX Crew-1 mission will be the first of regular rotational missions to the space station following completion of NASA certification. 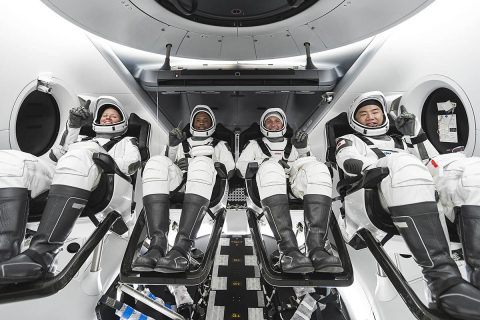 Crew-1 will launch in late October to accommodate spacecraft traffic for the upcoming Soyuz crew rotation and best meet the needs of the International Space Station.

The launch timeframe also allows for a crew handover with NASA’s SpaceX Crew-2 mission next spring.

The Crew-1 mission is pending completion of data reviews and certification following NASA’s SpaceX Demo-2 test flight, which successfully launched NASA astronauts Robert Behnken and Douglas Hurley to the International Space Station on May 30th and returned them safely home with a splashdown off the Florida coast in the Gulf of Mexico on Aug. 2.  Demo-2 was the first crewed flight test of a commercially-owned and operated human space system.

For almost 20 years [5], humans have continuously lived and worked aboard the International Space Station, advancing scientific knowledge and demonstrating new technologies that enable us to prepare for human exploration to the Moon and Mars.

NASA is enabling economic growth in low-Earth orbit to open access to space to more people, more science, and more companies than ever before.