Nashville, TN – Right fielder Skyler Luna [1] drove in the game-tying run then scored on an error in the eighth inning and the Austin Peay State University (APSU) baseball team secured a 5-4 come-from-behind victory against Belmont, Tuesday night at Rose Park. 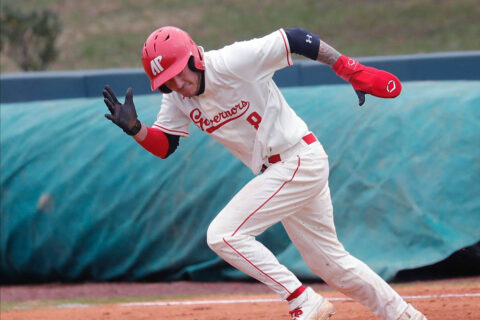 Austin Peay State University (18-29) scored the game’s first run – and the only run for the first six innings – in the first inning.

Second baseman Malcolm Tipler [2] walked and center fielder Garrett Spain [3] was hit by a pitch with one out.

Both pitching staff’s combined to keep the offenses shutdown over the next five innings. Austin Peay State University starter Peyton Jula [5] and reliever Keegan Mills [6] combined for six scoreless innings – Mills striking out six of the nine batters he faced. On the other side, Belmont starter Will Jenkins and two relievers combined to go five scoreless innings after the first, keeping the game 1-0 entering the seventh.

The offenses finally broke through in the seventh, combining for six runs. Austin Peay State University scored two runs in the top of the inning courtesy Tipler’s two-run single. But Belmont loaded the bases with no outs in the bottom of the inning and second baseman Jack Rando cleared them with a double to tie the game. Catcher Jackson Campbell followed with another double to score Rando and give Belmont its first lead, 4-3.

Austin Peay State University would respond in its next opportunity at the plate. Catcher Jack Alexander [7] hit a leadoff double to start the rally. Luna followed with a one-out double to score Alexander and tie the game again. Shortstop John Bolton [8] would hit a ground ball to second but the ball was misplayed and Luna scored on the overthrow, setting the final score.

APSU Gov’s reliever Michael Sturek [9] (1-0) was the beneficiary of the eighth-inning rally, picking up his first collegiate victory. Nick Wellman [10] notched his season’s second save with a scoreless ninth inning.

Luna went 1-for-4 with a RBI and run scored. Tipler was 2-for-3 with two walks, two RBI and a run scored. Spain and Head has two hits each.

Belmont reliever Logan Bowen (2-4) suffered the loss after allowing one unearned run in his inning pitched. Rando went 1-for-3 with three RBI and a run scored.

Next Up For Austin Peay State University Baseball

The APSU Govs are fifth in the Ohio Valley Conference race, one game behind the fourth-place Gamecocks with two weekends remaining. The top four teams in the OVC standings at the end of the regular season will advance to the OVC Baseball Championship, May 27th-29th, in Jackson Tennessee.