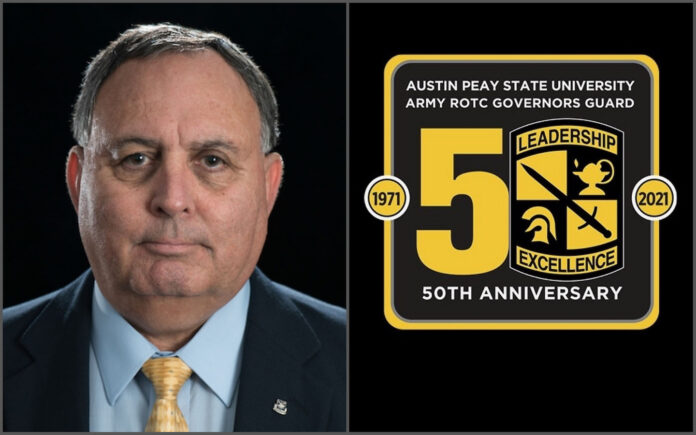 Clarksville, TN – The Reserve Officers’ Training Corps at Austin Peay State University (APSU) is celebrating its 50th year. To mark the occasion, each month through the end of the year, we’ll share one story of a Governor’s Guard alumni or former leader. This month, we share the story of APSU alumnus retired Lt. Col. Herbert Rodriguez.

Rodriguez graduated and was commissioned as an Infantry officer from Austin Peay State University in 1979. Rodriguez was a Distinguished Military Graduate and graduated as the 100th graduate of the APSU program.

Rodriguez graduated with a Bachelor of Science in Business Administration. He also earned a Master of Science in Educational Leadership from Trevecca Nazarene University.

Before enrolling at APSU to complete his degree and earn a commission, Rodriguez had prior experience as an Airborne infantry soldier. After commissioning, flight school, and conventional Army unit assignments, he served many years in the 160th Special Operations Aviation Regiment (Airborne).

During his service with the 160th Special Operations Aviation Regiment (Airborne), he commanded a MH-60 Black Hawk company. He piloted Super 68 during the Battle of Mogadishu in October 1993. During this battle, Rodriguez endured difficulties that he overcame and was awarded for.

Rodriguez’s helicopter’s main rotor blades were hit by an RPG while he attempted to insert a combat search and rescue to secure the crash site of a downed Black Hawk Super 61. Chief Warrant Officer 3 Dan Jollota and Rodriguez successfully inserted the personnel under heavy fire and managed to fly the severely damaged Black Hawk back to the airfield. Upon inspection, maintenance crews found that the main transmission and engine oil cooler had been destroyed.

This didn’t stop Jollota and Rodriguez, who immediately got into another Black Hawk to return to battle. Rodriguez was awarded the Distinguished Flying Cross for his actions in the battle.


Rodriguez retired in 1996 with 22 years of service. Since, he has worked as a program manager for Internal Data Resources since 2003 at Fort Campbell, Kentucky supporting the 160th SOAR (A) and the Special Operations Aviation Training Battalion.