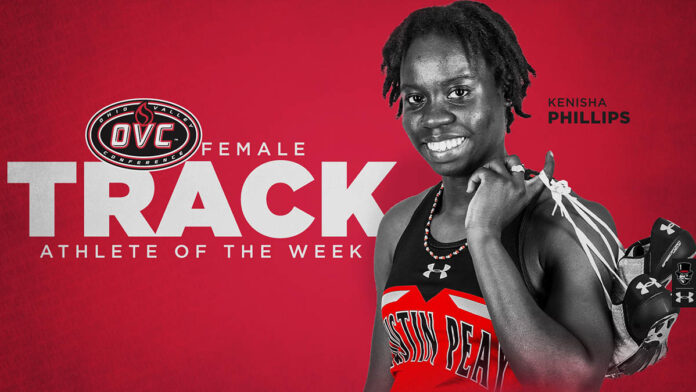 This past weekend Phillips registered a stellar performance at the Commodore Classic in Nashville. Phillips earned a third-place finish in the 400-meter dash along with being an integral part of the APSU 4×400 meter relay team finishing fourth.

[320eleft]In the 400-meter dash, Phillips won her finals heat and placed third overall with a season-best time of 56.33. It’s the fastest 400 time ran by a Gov this season and the 49th fastest in the NCAA. Phillips edged competition from notable schools such as Georgia Tech, Western Kentucky, and Murray State.

Later in the meet, Phillips guided the APSU 4×400 meter relay team to a fourth-place finish with a season-best time of 3:54.53. The relay team finished ahead of Lipscomb, Murray State, South Florida, and host school Vanderbilt.