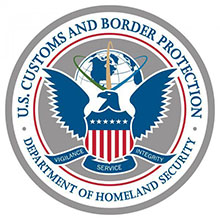 In Fiscal Year 2021 alone, CBP issued 73,917 emergency action notifications for restricted and prohibited plant and animal products entering the United States, conducted 630,150 positive passenger inspections, and issued 7,190 civil penalties and/or violations to the traveling public for failing to declare prohibited agriculture items. These finds can range from the ordinary to the outrageous.

The following lists the Top 10 agricultural finds of 2021 from throughout the United States:

1. In February, CBP officers at the commercial facility at the Otay Mesa Port of Entry seized more than 12,000 pounds of marijuana with a street value of $27 million found commingled within a shipment of papayas. During a secondary inspection, a CBP narcotics detector dog immediately alerted to the shipment, and officers discovered 873 wrapped packages of marijuana.

2. In April, CBP agriculture specialists at the Port of Memphis, TN inspected a shipment from China en route to New York City manifested as “The Scarf” and found that the shipment actually contained 750 unfertilized avian eggs. According to the U.S. Department of Agriculture (USDA), China is currently affected by Highly Pathogenic Avian Influenza(HPAI) and Newcastle Disease, both of which are highly contagious and fatal to the U.S. poultry industry and various avian wildlife. The eggs were not accompanied by any documentation detailing the genus or species, nor was there any indication of their purpose, so they were destroyed.

3. CBP agriculture specialists working at the George Bush Intercontinental Airport in Houston intercepted 15 live giant land snails from a passenger’s luggage in early July. The passenger was traveling from Nigeria and initially only declared dried beef, but later amended her declaration to include live snails. During an examination of the passenger’s luggage, agriculture specialists found three plastic zip-closed bags containing the live snails with fresh leaves and about a quarter pound of beef. The snails were turned over to USDA, who identified the snails as giant land snails, also known as banana rasp snails.

4. In August, CBP agriculture specialists assigned to the Boston Logan International Airport encountered a 35-year-old female arriving from Santiago, Dominican Republic. During a baggage examination, 11 kilograms of pork sausages were discovered. Just a month prior, Dominican Republic officials confirmed the presence of African swine fever, a highly contagious disease of wild and domestic swine, that can spread rapidly in swine populations with extremely high rates of morbidity and mortality. The pork sausages at the Boston airport were removed and turned over to a USDA hauler for destruction.

5. CBP agriculture specialists assigned to the Paso Del Norte Border Crossing seized 320 pounds of pork bologna and 30 pounds of turkey ham in August. The offending meat was discovered during an inspection and had been hidden under blankets, under the seats, center console, and inside a duffel bag. The individual was issued a $1,000 civil penalty, and the products were confiscated.

6. In September, a traveler arriving from Japan reluctantly declared he was in possession of Botulinum and E. coli DNA plasmids intended for research. An inspection conducted by CBP agriculture specialists revealed 27 vials of the biological material. The traveler lacked the required documents, such as the official statement attesting to the non-infectiousness of the material, required by the U.S. Centers for Disease Control and Prevention (CDC). CDC was consulted and, after reviewing the samples, agreed that more information was needed to determine admissibility. The traveler withdrew his application for admission to the United States and returned to his country with the biological materials.


7. Also in September, CBP agriculture specialists at the Port of Gulfport discovered a butterfly larvae pest, informally known as the Saunders 1850, while inspecting a shipment container of pineapples from Costa Rica. Due to the potential impact to U.S. agriculture, the shipment of pineapples, worth $15,000, was destroyed. According to USDA, this was the first time this species had been discovered in the United States.

8. In October, CBP’s agriculture team in Minneapolis discovered six large bags containing clothing, two primate arms, dry fish, cooked snails, plant material, cow skin, bushmeat, and eru plant material. After notifying the CDC, the team seized the primate arms and bushmeat and destroyed them according to USDA protocol. The seeds were submitted to USDA for identification and the passenger was informed of human-health concerns with handling and consuming bushmeat, including the potential transmission of ebola and monkeypox viruses.

9. CBP officers at the Laredo Port of Entry intercepted a large clutch of live poultry hidden throughout a vehicle back in November. A total of 47 roosters and hens were found wrapped in stockings inside a purse, and underneath the seats, floor mats, inside the glove compartment, and trunk of a vehicle in the SENTRI lane. A $500.00 penalty was issued to the driver for attempting to import prohibited agriculture items while being a SENTRI cardholder. The SENTRI card was turned in to the SENTRI Enrollment Center, the vehicle was seized by CBP under 19 USC 1595, and the live poultry was seized and transferred to USDA’s Veterinary Services.


10, Sometimes smugglers attempt to ship prohibited food and plant items with the use of fraudulent paperwork. In December, CBP agriculture specialists in Newark encountered a shipment of fresh peppers from Guatemala. During the document review, the provided phytosanitary certificate, which must be used to facilitate importer plants and plant products, was blurry, and an original certificate could not be found. It was later discovered that the certification was fraudulent, which can alter the options for phytosanitary actions that must be taken to prevent the entry of plant pests, prohibited plant products, or animal products capable of introducing foreign animal diseases.

“The efforts of our frontline personnel and CBP agriculture specialists augment CBP’s enduring mission priority to facilitate legitimate trade and travel while ensuring a robust agriculture safeguarding continuum,” said John Sagle, Agriculture Programs and Trade Liaison Acting Executive Director. “Whether it is the prevention of an introduced foreign animal disease, an invasive plant pest, or unknown biological material, our CBP agriculture specialists and our agriculture canine teams are steadfast in their determination to keep America’s agriculture and natural resources safe.”

In an attempt to ease the process for travelers needing to declare agriculture and biological products prior to arriving at an airport in the United States, CBP has moved the declaration process to the CBP One mobile application, which will give travelers more transparency throughout the request process, including real-time status updates by way of push notifications, which can also be sent to a group email. Travelers can also upload documents such as accompanying permits, certificates, or statements of non-infectiousness for CBP review prior to arrival.