Film Director David Earnhardt and activist Bernie Ellis are coming to Clarksville for this city’s premiere screening of Earnhardt’s new film, Uncounted: The Movie on December 7 at 7 p.m. at the Unitarian Universalist Fellowship at 3053 Highway 41A South (two miles past WalMart on Madison).

Uncounted is a new documentary that explores the issues surrounding electronic voting and is a strong statement in support of a “paper trail” documenting how Americans cast their votes.

The film tackles the issue of voting machine error/failure, the need for a paper trail of votes, the political and business ties between government officials and manufacturers of these DRE (Direct Recording Electronic) voting machines, and the ease of tampering with such machines and “flipping” votes that are electronically counted.

“I cannot think of anything more important than to save the core of our democracy — the vote! — David Earnhardt (at right)

The film also reviewed extensive cases of mechanical errors, lost votes, voters turned away from polls, incomplete ballots and the installation of uncertified software into voting machine reported from across the nation.

Uncounted made its national debut earlier this month in Nashville, when it was also announced that Secretaries of State in all fifty states were being subjected to a lawsuit that calls for a mandatory paper trail of votes. 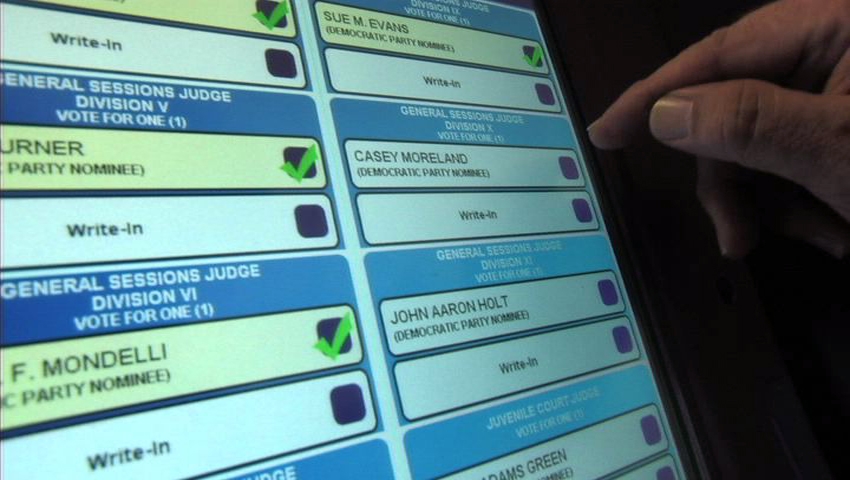 The lawsuit is aimed at prohibiting the use of all types of vote counting machines, and requiring hand-counting of all primary and general election ballots in full view of the public.The lawsuit has raised significant constitutional questions challenging the generally accepted practices of state election officials of relying on “black box” voting machines to record and count the votes at each polling station, and allow tallying of votes by election officials outside the view of the general public. In many cases, states have officially authorized voting “systems” that leave virtually no paper trail from which to audit the vote. (excerpt from We The People)

Ellis (left), in a statement made in Nashville, said that regardless of what voters are being told, “there is still time to pass legislation that would mandate voter verifiable paper ballots in 2008.” The Tennessee Voter Confidence Act of 2007 [Senate Bill 1363/House Bill 1256], sponsored by Senator Joe Haynes and Rep. Gary Moore, mandates a paper trail.

“Today in Tennessee, 93 of our 95 counties use nonverifiable, paperless touch-screen voting machines . In 2006, over one in every six Tennessee counties reported problems with this equipment. Our state is not alone, but (sadly) it is now one of the worst states for voting security and accountability in this nation.” — Bernie Ellis

The lawsuit seeks an Order from the Court prohibiting the use of all voting machines and to force election officials to instead utilize paper ballots and to count and total all votes by hand, always in full view of the public. Plaintiffs from all fifty states have signed on to the lawsuit.

Earnhardt and Ellis will host a discussion of electronic voting following the film. The event is sponsored by the Unitarian Universalists, Clarksville Online and the FreeThinkers for Peace and Civil Liberties. Admission is free, but bring your own popcorn. Copies of the DVD will be available at this presentation. For more information, call 931-920-5390.