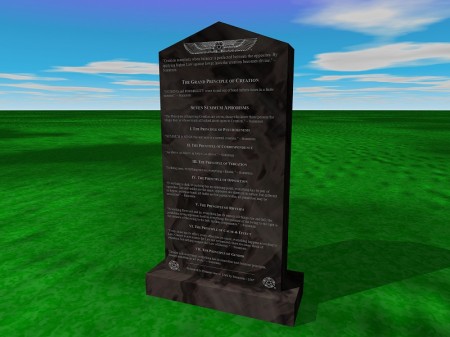 A Ten Commandments lawsuit to be heard this week by the U.S. Supreme Court inappropriately focuses on free-speech rights rather than church-state separation, says Americans United for Separation of Church and State. The justices will hear oral arguments Wednesday in Pleasant Grove City v. Summum.

The case tests whether Pleasant Grove City, Utah, can accept a Commandments monument for permanent display in a local park while turning down a monument showing the tenets of another faith. The Summum religion sued the local government after its display was rejected.

The 10th U.S. Circuit Court of Appeals ruled that Summum had a free-speech right to display its monument next to the Commandments monument.

Summum is an informal gathering of people who are seeking to understand themselves, to know who they truly are inside. Summum is not about doctrine, dogma, or beliefs, but about gaining the experiences that will awaken us to the spirit within and to our place in the matrix of Creation’s formulations.

Normally when the government discriminates against one faith while preferring another, a lawsuit would be filed charging a violation of church-state separation. In this situation, due to roadblocks in pre-existing 10th Circuit law, attorneys for Summum made their argument based on First Amendment free-speech principles, not Establishment Clause grounds.

Americans United is sympathetic to Summum’s plight, but is concerned that Summum’s free-speech argument could weaken church-state separation legal doctrine. The watchdog group filed an amicus brief in support of neither Pleasant Grove City nor Summum and requests the Supreme Court to reverse the lower court’s decision. That way, Summum can re-litigate this case under the framework of church-state separation.

“Our Constitution requires the government to remain religiously neutral. Government officials should never favor one faith over others. Pleasant Grove City should never have approved the Commandments display in the first place. If the city had said no as it should have done, we wouldn’t be facing this mess at the Supreme Court.” — Rev. Barry W. Lynn, Americans United executive director

Lynn, however, urged the justices to approach the case with great caution.

“If the Supreme Court lets Summum’s free-speech argument stand,” he said, “it could open the door for government to use private speakers to spread a particular religious belief.

“It would also mean if the government allows any group to erect a permanent monument on its land, it must allow all proposed monuments to be erected with no restrictions,” he continued. “This could lead to groups putting up permanent monuments promoting hateful messages on public land throughout the country.

“Summum should have the chance to re-argue this case under the correct legal doctrine of church-state separation,” Lynn concluded. “Let’s hope the Supreme Court comes to the right conclusion here.”