Nangarhar Province, Afghanistan – Afghanistan has undergone heavy development over the past nine years, resulting in vast improvements in the areas of education, health, living conditions, travel and security.

These positive changes are due in part to partnering projects coordinated by the Government of the Islamic Republic of Afghanistan, Afghan National Security Forces and U.S.-led agribusiness development teams and provincial reconstruction teams, and coalition forces. Like any worthwhile program, there are associated costs.

Foreseeing the future monetary needs of Afghanistan to continue these projects, Regional Command-East created a program to assist GIRoA in understanding the budgeting process that will ease the transition from the U.S. dollar to the afghani. A program designed to legitimize GIRoA and assist in creating stability within Afghanistan.

Task Force Bastogne is the first to implement this program in Afghanistan.

Afghanistan’s Ministry of Finance along with Soldiers and civilians from the ADTs, PRTs, and TF Bastogne gathered at the governor’s compound September 20th-21st for the East Region Provincial Budgeting Workshop in eastern Afghanistan’s Nangarhar Province. 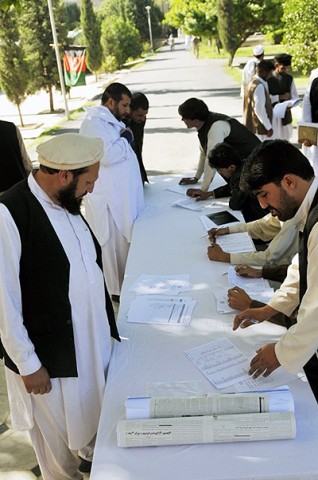 Leaders from Nangarhar, Nuristan, Kunar and Laghman provinces attended the conference that introduced the “Commanders Emergency Response Program as a Budget” program.

“This is the first time the Central Ministry of Finance Budget office is coming down to discuss with a group of provincial ministries the development of the budget,” said Joanne Jensen of St. Augustine, FL, a Department of State representative. “What everyone has been pushing for is that the central ministries start pushing down the budget and working with the provinces and the districts.”

Most of the funding for projects and sustainability come from donor nations, various task forces and other organizations. The prospect of removing such funding has created a potential for instability within Afghanistan. This program is designed to prevent that.

“This is a step in that direction to explain the budget, to discuss with the ministries their priorities and issues with the budget process,” said Jensen. “It is also very helpful for TF Bastogne, both civilian and military mentors, to know how the money is flowing down from the central ministries to the provinces and to the districts.”

The intent of CERP

“The intent of CERP as a Budget is not to work on the development in terms of building projects and those types of initiatives,” said U.S. Army Maj. David Kaczmarek of Aurora, OH, TF Bastogne civil affairs officer. “That has been done for the last nine years. We have been constantly building things; to the point now where we have to go back and repair the things we built.”

It has been a challenge to assess how well the Afghan government and her people can maintain what they have. The program aspires to alleviate this issue through several ways.

The program also teaches the Afghans how to put together a development plan with short-, mid- and long-term goals. These plans must support the objectives addressed in the Afghan National Development Strategy.

A lot of times, if you ask some of the locals, they’ll tell you the PRT is the government because they gave the service deliveries up until this point, said Kaczmarek. “The point of this is that we transition the management piece to the Afghans. But, we have to train them up. That’s really what CERP as a Budget is going to do for them.”

GIRoA financial advisors eagerly took the initiative to begin teaching district and provincial officials on budgeting effectively. By taking the front, they hope Afghanistan will soon be able to stand on its own two feet.

“In order to be a successful Afghanistan government, they have to change their budget system,” said an Afghan representative to the district and provincial leaders. “… we hope with hardworking, one day we will be able to improve a little bit and cover our own budget.”

Since the start of the program, coalition forces placed Afghans in the lead, advising them where needed and stressing the importance of the program.

“Any project that comes out of this will be completely based on the Afghan government’s developmental efforts,” said Kaczmarek. “Coalition is now going to play the role as mentor to make sure they are looking at the right things for projects and sustainability. Making sure they are good quality projects, understanding the difference between needs and wants. But everything that does come out of this is going to be an Afghan product,” he said. “More importantly, it’s going to be based on the Afghan system that is supposed to be in place, not the one we would like to be in place.”