THP Urges Motorists Beware: Drunk Driving Will Not Be Tolerated

Nashville, TN – The Tennessee Highway Patrol will do its part to ensure those celebrating Halloween enjoy the fall tradition responsibly and safely. Trick-or-treaters, parents and adult party goers are encouraged to follow a few simple rules to avoid becoming a scary statistic.

“Halloween is often one of the deadliest nights of the year for impaired drivers,” said Department of Safety Commissioner Dave Mitchell. “The decision to prevent a horrible accident from happening is easy – don’t drink and drive. Our State Troopers are prepared to patrol and remove any and all drunk drivers from our roadways.”

Nearly 5,000 people in the U.S. died in crashes during the Halloween time period from 1996-2005. According to the National Highway Traffic Safety Administration (NHTSA), in 2008, 58 percent of all highway fatalities across the nation on Halloween night involved a driver or motorcycle rider with a Blood Alcohol Concentration (BAC) of .08 or higher.

Last year in Tennessee, two people were killed in two crashes on Halloween between midnight, October 31st, 2009, through 6:00am, November 1st, 2009. Both of those crashes involved alcohol. That compares to seven people killed in six crashes on Halloween during the same time period in 2008. Four out of the six fatal crashes in 2008 involved alcohol.

“Our Halloween plea to everyone is to keep the party off the road,” said THP Colonel Tracy Trott. “If you’ve been drinking, don’t make the poor decision to get behind the wheel – it could cost someone their life, maybe even your own. So please be smart; it’s not worth the risk.” 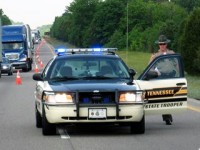 Partygoers, parents and children alike have a responsibility to be safe this Halloween. Simple precautions for partygoers include designating a sober driver in advance or taking a taxi, while parental guardians should closely watch children and teach them to obey safety rules.

Halloween is the most dangerous day of the year for pedestrian injuries and deaths among young children. The Centers for Disease Control (CDC) found that the number of deaths among young pedestrians (ages 5-14) is four times higher on Halloween evening than any other evening of the year. Thirty-eight percent of all young (under age 16) pedestrian fatalities occurred between 3:00pm and 7:00pm, and alcohol involvement – either for the driver or pedestrian – was reported in 48 percent of traffic crashes that resulted in pedestrian fatalities.

Below are tips parents, children and motorists should keep in mind before heading out the door this Halloween. Sobriety and Driver License checkpoints for the Halloween weekend are also listed.