Nashville, TN – The Tennessee Highway Patrol today named Memphis Dispatcher Beverly Bearden the 2010 Dispatcher of the Year. Dispatcher Bearden is among more than 90 dispatchers working for the Department of Safety and Homeland Security across the state of Tennessee. Nine of those dispatchers were also recognized as Dispatcher of the Year in their respective district. The awards were announced during a Friday morning ceremony held at the THP Training Center in Nashville.

“There are 82 THP Communication Dispatchers and nine supervisors who are the unsung heroes of the Highway Patrol,” said THP Colonel Tracy Trott. “They show more concern for other people, than they do for themselves.  While their work oftentimes goes unnoticed, they press on until the job gets done. They are the lifeline of the Highway Patrol and it is our honor to recognize them for their dedication and service.” 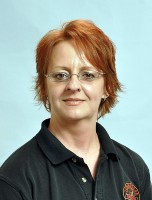 Jeffrey Collins was named Dispatcher of the Year for the Knoxville District. A member of TDOS since November 2007, Collins has been a dedicated employee, who willingly accepts special assignments, such as Bonnaroo and Strike Team events, and has assisted Chattanooga dispatch due to its manpower shortage. Dispatcher Collins’ calm demeanor was tested on May 17th, 2010, when he received a call from a driver who advised his vehicle would explode if his speed dropped below 50 miles per hour on Interstate 75 South. Dispatcher Collins remained on the phone with the driver, while he notified Sgt. Jimmy Whitt and Trooper Chris Best of the situation as well as Chattanooga THP and Loudon and Knox County 911. Over the next two hours, Dispatcher Collins updated various agencies of the locations and speeds of the vehicle, while remaining on the phone with the driver. The vehicle was finally stopped without incident and all occupants, including two children, were uninjured. Dispatcher Collins remained composed and professional throughout the entire situation.

Angela Patterson has been named the Nashville District’s Dispatcher of the Year. Dispatcher Patterson, who has been with the department for nearly three years, has always exhibited a tireless work ethic and drive to be the best. On December 9th, 2010, she received a call from a motorist who had an unresponsive passenger in the vehicle. Dispatcher Patterson kept the caller calm, attentive and provided detailed CPR instructions until professional medical personnel could arrive. During this stressful event, Dispatcher Patterson kept her composure, remained confident and continually updated the Computer Assisted Dispatch (CAD) with accurate and timely information, while directing emergency medical responders to the scene.

Kimberly Woodby was named the Dispatcher of the Year for the Fall Branch District. Since joining the THP in January of 2002, Dispatcher Woodby has become one of the most dependable and detail-oriented dispatchers. She is a Communications Operator Training Class graduate, who returned with knowledge to help develop a training plan for the district and implement a new task evaluation list that aide in the training of new dispatchers. Dispatcher Woodby’s utilizes her administrative skills to ensure that all contact lists are up-to-date and Criminal History and Wrecker logs are accurate. She has also been designated as one of the trainers of the new Tennessee Valley Regional Communications Systems (TVRS).

Johnathan Isleman has been posthumously awarded the Dispatcher of the Year honor for the Cookeville District. After serving the Department of Safety and Homeland Security for 12 years, Dispatcher Isleman lost his battle with cancer in August of 2010. State Troopers described him as the type of dispatcher they wanted on the other end of the radio. He was friendly, professional and had a passion for the job. Dispatcher Isleman had a desire to exceed all expectations and set a positive example for his co-workers. He even dispatched from his hospital bed. Dispatcher Isleman’s hard work and dedication set the standard for others to follow.

Richard Dorning was named Dispatcher of the Year for the Lawrenceburg District. A 34-year veteran of the Department of Safety and Homeland Security, Dispatcher Dorning has garnered the respect and admiration of every employee in District 7. Dispatcher Dorning has been steady in the radio room by providing gentle guidance as incidents begin to unfold and lives hang in the balance. While scores of employees have passed through the doors, Dispatcher Dorning’s constant presence has afforded wisdom and direction to fellow employees and his countless achievements have saved State Troopers time and effort. Dispatcher Dorning’s knowledge extends far beyond the realm of law enforcement and he has been a true friend to everyone, sworn or unsworn.

Mary McIntosh and Dawn Bennett have been named Co-Dispatcher of the Year for the Jackson District. On November 13th, 2010, a man came in to the THP Jackson Headquarters requesting help to locate his daughter. He was unable to reach her by cell phone and she was overdue from Memphis. After learning that the daughter was an insulin dependent diabetic, Dispatchers McIntosh and Bennett made contact with her from another phone. They quickly realized she was in distress and placed the call on speakerphone, where the man heard his daughter say “low” – suggesting low blood sugar. Dispatcher McIntosh alerted EMS, while Dispatcher Bennett determined the girl’s location. Trooper Massengill, Sergeant McCoy and the young lady’s father, found her in her vehicle, comatose and in need of medical attention. The quick action and compassion exercised by Dispatchers McIntosh and Bennett saved the young lady’s life.

The Tennessee Department of Safety’s (www.TN.Gov/safety) mission is to ensure the safety and general welfare of the public.  The department encompasses the Tennessee Highway Patrol, Office of Homeland Security and Driver License Services. General areas of responsibility include law enforcement, safety education, motorist services and terrorism.