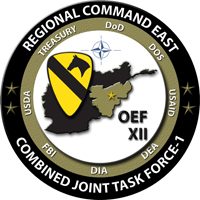 Bagram Airfield, Afghanistan – One of the perils of communication is that a message too often repeated can lose its impact. The adage bears reflection, “Familiarity breeds contempt.”  From slideshows to speeches, many tools are employed to communicate expected standards and behavioral norms. Yet, the reaction is not always warm. The reactions are telling – the rolled eyes, the inevitable sigh, the unexpected appointment, the missing e-mail reminder and the unplanned cell phone ring.

Such a communication conundrum can be devastating to an organization. If the core principles are ignored, the downfall is predictable. The airwaves and printed press regularly record these failures. The essential truths that guide an organization are integral to its overall health, success and longevity.  Articulation without acceptance and assimilation is only noise.

The Army is not immune to this phenomenon.  Driven by the Army Values, Soldiers are provided boundaries for core beliefs and consistent behavior. These truths are applicable whether in uniform or out. Convictions embraced only during the duty day are conveniences that provide benefits, not an authentic commitment to the organization, its origins and its opportunities. Uniform insignia may be attached by Velcro, values are not.

Deployments provide innumerable challenges to the message of the Army Values. Distance from the flag pole changes an environment. The absence of familiar leadership personalities causes the message to become fluid, if not stagnant.  Without a purposeful reminder of the Army Values, the slippery slope of lowest common denominators is a likely reality. Actions and attitudes can quickly devolve.

Loyalty is foundational to the organization.  Soldiers have committed to support and defend the country, its Constitution and citizens. Loyalty is seen in habitual conduct manifestations which ultimately reveal one’s character. This demands commitment around the clock, globe, and post. Loyalty is not an unmitigated “yes”. It is a willingness to speak the truth, even when not popular or wanted.

Duty entails responsibly to the team. It moves beyond minimal expectations and insists upon achieving the highest of expectations. Duty strives to do it right the first time, for there is likely no time to do it over again. It is what propels Soldiers towards “mission first.” Duty is not about monetary compensation; it is about priceless satisfaction.

Respect is critical to the Army’s multi-cultural and multi-ethnic demographics. In the midst of great diversity, greater unity is possible. This unity does not mean uniformity. There will always be diverging view points on religion, politics, etc. Careful contemplation before engaging in caustic conversation is always best. How one wishes to be treated and heard should be the hallmarks of human interaction. As one has wisely said, “In essentials, unity; in non-essentials, liberty; in all things, charity.”

Selfless service is a commitment to others, no matter the cost. It is blind to watches and calendars, seeking to tirelessly unlatch the burdensome rucksacks of others. This “you first, me second” mentality reminds Soldiers of the larger overall mission and the irreplaceable nature of the team. Many hands do make light work. A selfish act may not only impact the individual, but also the organization. If someone has to be removed from a position, there will be a tidal wave of personnel moves and repercussions. The mission is unnecessarily halted and irrevocably altered. Selfishness is an antagonistic antonym.

Honor can be seen as both a noun and a verb. It is inwardly present, but is outwardly practiced. Honor not only exists, it must be exercised; the internal must become external. This principle of nobility drives the Soldier with passionate purposefulness. Honorable Soldiers do not function for awards, decorations, or written performance accolades; their service is motivated by a commitment to the warrior ethos.

Integrity is congruency. It is the nature of being consistent and habitually dependent; it is not perfection, but rather, direction. Though the path may wind, and the terrain grow difficult, the destination is kept in sight. Integrity embodies truthfulness and understands that someone is potentially always watching decisions made, actions chosen, and responses given. Integrity is allergic to the “do as I say, not as I do” mantra. It rejects the noisy jawbone and brittle wishbone, reliably opting for the steely backbone.

Personal courage respects the inevitable obstacles, but will run toward them for the inherent opportunities. It will dig deeply and summons a decided introspection, consequently engaging the discovery, no matter what is found. Personal courage comprehends that ability without availability is a liability to self, Soldiers and service.