Austin Peay (2-10, 0-1 OVC) trailed most of the match and had to mount comeback attempts in the first, third and fourth sets to force the close scoring. Hernandez was consistent throughout the night, recording four kills in the first set, three in the second and five each in the third and fourth sets to finish with 17 kills – the most by a Lady Govs hitter this season.

Eastern Kentucky (6-6, 1-0) controlled the first set early, jumping out to a 7-3 lead. Austin Peay battled back and tied the set, 9-9, courtesy a 6-2 run that included a pair of kills by both Hernandez and senior outside hitter Kayla Grantham. The Lady Colonels did not surrender the lead and rebuilt its four point advantage, 17-13.

The Lady Colonels lead would reach five points, 22-17, before Austin Peay mounted a 6-1 run – aided by four EKU errors – tied the set, 23-23. Eastern Kentucky committed another error to set up an APSU set point and junior outside hitter Nikki Doyle finished the set with a kill, giving APSU a 25-23 victory.

Eastern Kentucky led the second set wire-to-wire, but never by more than five points. The Lady Colonels scored five of the set’s first six points and would build their largest lead, 10-5, early on. Austin Peay could not get closer than two points late in the set before falling, 25-19.

Eastern Kentucky grabbed the early advantage in the third set and built a three-point lead that lasted until Austin Peay scored three straight points to tie the set, 14-14. Austin Peay would lead by a point twice, but could not sustain a scoring run. Most of the set’s 11 ties came in the closing stanza with a EKU attack error tying the set, 23-23. But the Lady Colonels used back-to-back kills by Ashley Edmond and Alexis Plagens to secure the 25-23 win.

Austin Peay tried to flip the script in the fourth set, leading 6-3 after scoring four straight points. The Lady Govs nursed that lead until surrendering consecutive points on errors that led to a 13-13 tie. Eastern Kentucky took a two-point advantage, 17-15, after scoring three straight points but could not escape. Austin Peay leveled the set at 23-23 before Edmond scored a kill to set up match point and APSU committed an error on the ensuing point to end the match.

Hernandez 17-kill, .184 attack-percentage night was aided by a 12-kill outing by Doyle and an 11-kill effort from sophomore middle blocker Lauren Henderson. Doyle had an uncharacteristic night, charged with seven errors and finishing with a .116 attack percentage. Austin Peay finished the contest with 60 kills and a .215 attack percentage. 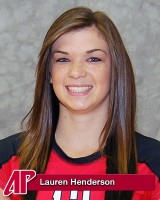