The win, along with a Saturday loss by Murray State, helped the Lady Govs move into a three-team tie for sixth place in the OVC regular-season race. In addition, those three teams stand just one game behind fifth-place Eastern Kentucky.

Austin Peay (10-19, 8-10 OVC) began the match by rallying from a 14-12 deficit in the opening set, scoring four consecutive points to take a 17-16 lead. Austin Peay would hold that lead until it committed back-to-back attack errors, allowing UT Martin to tie the set, 24-24. However, junior Nikki Doyle recorded a kill to break the tie and sophomore Calyn Hull served up an ace to win the set, 26-24.

The Lady Govs nearly led the second set wire-to-wire. Austin Peay led by five points, 19-14, only to watch UT Martin slowly reel the set back to a 22-22 tie after a Kelly Hogan kill. Again, the Lady Govs got the next point after the tie – on a UTM attack error – and took a two-point, 24-22, lead on senior Paige Economos’ service ace. The Skyhawks staved off one set point but Hernandez’ fifth kill of the set secured the 25-23 victory.

UT Martin (15-12, 10-7 OVC) flipped the script in the third set, leading most of the way with only six ties. The Skyhawks held their largest lead at 7-3 but Austin Peay scored the next four points to tie the set, 7-7. UTM would not lead by more than three points the set’s remainder. The Lady Govs would tie the set for the final time at 22-22, but the Skyhawks scored the next point on an Emily Keaton kill to break the tie. An APSU error set up set point, which UTM secured with a Kelly Hogan kill to win 25-22.

The fourth set was a battle throughout with Austin Peay and UT Martin fighting through 11 ties and seven lead changes. UT Martin had the first set point opportunity at 24-23, but Austin Peay scored the next two points on kills by freshman Hillary Plybon and Doyle to take a 25-24 lead and set up a match-point chance. UT Martin denied that match point thanks to an Allie Whimpey kill and then watched APSU commit back-to-back attack errors to hand the set to UTM, 27-25. 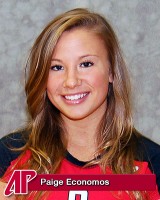 UT Martin led the fifth set, 8-6, at the changeover. Austin Peay tied the set, 10-10, after consecutive Doyle kills and took the lead on a UTM attack error. The Skyhawks would force two further ties but Austin Peay got to 13-12 on a Hernandez kill and to match point, 14-12, after a Economos kill. Britany Wilburn notched a kill to stave off that first match point but Hernandez and Plybon combined for a block on the next point to give APSU a 15-13 match-securing set win. 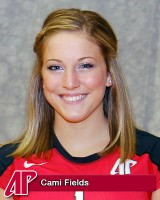 Ilyanna Hernandez was selected as the Copies in a Flash Player of the Match.