Clarksville, TN – On October 18th, 2012, around 12:30 am, officers were called to a club at the 1900 Block of Fort Campbell after security spotted three men flashing a large amount of cash and taking pictures of it. One of the men, James Jackson, had purchased drinks using counterfeit $20.00 bills which had the same serial numbers.

When officers arrived, they found Jackson with a large amount of $20.00 and $50.00 dollar bills in his possession which were counterfeit. Jackson resisted officers attempts to take him in custody, but officers were able to subdue him after a short struggle. 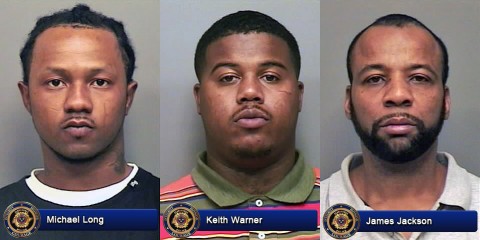 The other two men, Michael Long and Keith Warner were taken in custody without incident. Michael Long was found with synthetic drugs in his possession. Also, while Long was in an interview room, he put out a lit cigarette on the carpet leaving a burn mark.