Clarksville, TN – Austin Peay State University men’s tennis team seeks to defend its Ohio Valley Conference Tournament crown when it faces Eastern Illinois, 10:00am, Thursday, in the opening round of the 2014 OVC Tournament at the Heflin Tennis Center in Paducah, KY.

After winning its first OVC Tournament title since 1974 last season, Austin Peay looks to make the wait between the second and third titles much shorter.

Although a mid-season swoon left the Govs in third place and out of the running for a first-round bye, Austin Peay reeled off five straight conference wins to close the season and look to carry that momentum into its tournament-opener against the Panthers. 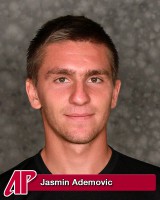 The Govs top four has been integral to the core success experienced this season. Despite a mid-season ankle injury that coincided with the Govs late-March struggles, senior Jasmin Ademovic has turned in yet another stellar campaign, finishing with an 8-5 mark in dual season and a 5-3 record in OVC play. The Serbian has hopes of a fourth consecutive first-team All-OVC nod, which would be a program-first.

He’s been buoyed by a trio of juniors who have combined to make Austin Peay among the deepest OVC squads. Dimitar Ristovski took over at No. 2 this season and did yeoman’s work, posting a 10-5 mark – his third straight season with at least 10 singles victories. 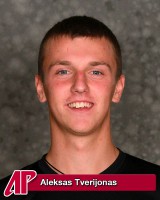 Aleksas Tverijonas has continued to quietly be among the most consistently great performers in the OVC; he’s 16-2 in singles play this season and a combined 34-3 the last two springs.

After starting the year with eight straight losses, Iago Seffrin has turned his season around, ripping off eight singles wins in a row to enter the tournament. He and Ristovski have combined for one of the best doubles teams in the conference, posting a 12-2 mark together that includes a 5-1 conference record.

The freshmen singles players at the Govs’ lineup lower half have grown up fast in their first year on campus, with James Mitchell and Manuel Montenegro each posting seven victories in their first APSU season.

Evan Borowski, a sophomore, has filled in ably when called upon in singles play and has recently teamed with Montenegro to form an underrated No. 3 doubles pairing.

The Govs began their recent run of success against the Panthers on March 29th, earning a 5-2 home win. Although Austin Peay did not secure the doubles point in that outing, the Govs picked up singles wins from No.’s 1-5 slots to down the visitors.

Austin Peay has won five straight against Eastern Illinois dating back to the 2009 season.

The No. 2 seed last season, Austin Peay picked off Eastern Kentucky and Belmont en route to an OVC Tournament title in head coach Ross Brown’s first year at the helm.

If the Govs are able to handle the Panthers in the first round, they will be set up for a rematch of last year’s final against the Bruins at 10:00am, Friday. Belmont beat the Govs 4-3 on March 22nd in Nashville.