HomePolitics Credo Amouzouvik endorsed by the United Steelworkers of America in the...
Politics

Clarksville, TN – Although Credo Amouzouvik has not yet attained  “household name” status, his candidacy for District 7 Congressman is gaining momentum fast. Mike A. Padgett III, President of the United  Steelworkers of America, District 9 Local 501-G, announced the endorsement of Credo on June 4th at Credo for U.S. Congress campaign Headquarters, 322 Union  Street, in Clarksville.

“I am running to represent the hard-working men and women of America,”  insists Credo. “We can’t take away the unions; if we do, we’ll go back  to the days of slavery. Your boss can tell you to work any number of  hours or you’ll be fired. Workers will have no one to back you. Your  choices will be to do what you’re told or you don’t eat.”

“You can’t play politics with people’s lives,” Credo states irrevocably.  “That causes people to go hungry, to do without, to die.”

Mike Padgett added, “When I went to South Africa, I was told that  politics shape your life. You can’t sit on the sidelines and expect things to change. You have to  be active.”

“I stand with working men and women. We have to reinstate the rights of teachers to participate in collective bargaining,” Credo says. “It’s wrong when we pay teachers less than we do the people they have trained. I have a heart for families and children. When I take campaign contributions they will not be from special interests—just from working men and women.”

“If you are not in the top one percent, you are now working class,” Mike  Padgett states. “Mostly we are now the working poor, living one pay  check from disaster. When I see cars I call ‘struggle vehicles’ and they  have Republican stickers on their bumpers, I think something is wrong  with you. These politicians are not working for you. We steelworkers stand with Credo!”

“I am glad for their faith in me and I am honored,” Credo says. “This  endorsement means that I must get out and work harder.” 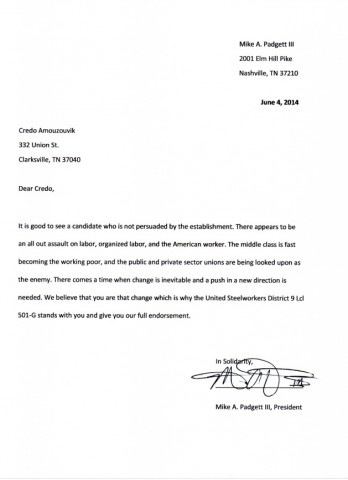 Two years ago when Credo ran for the first time, with no  organized team and no name recognition, he won 33 per cent of the vote. This time he truly plans to win.

A Clarksville resident, Credo and his wife are parents of five children: Te’a, his 18 years old daughter who has just graduated from Clarksville High School, 17 years old son Tay who is a linebacker at CHS, Alayna who is six years old, three years old Sylvio, and five months old Sidney.

When asked how he met his wife, Credo confesses that they were both  paying their light bills when he spotted her. “That’s a beautiful  woman,” he immediately thought but was shy about confronting her. He  went outside the building and waited, debating with himself about  whether or not to talk with her. When she came out, he stopped her and  introduced himself—and told her she was very beautiful. He asked if she  was single, and hearing she was, asked her out for a drink. She agreed  and “we’ve been together ever since!” he admits.

Credo carries in his phone a photograph of himself during his first  mission in Iraq. “Another guy and I were there for quite a while and  began to get bored so we took pictures of each other with our phones.  Suddenly I heard a thump behind me. We were in a space that was about  four feet by four feet. I knew they were coming. The AK-47s started  popping. My partner slid to the ground and put his hands over his head.  I thought to myself that I was going to die some time but it wasn’t  going to be that night. I shot about 500 rounds and the first truck stopped  coming. I kept firing with a second weapon because there was no time to  reload. I kept shooting at the second truck. I was calling for help but  they couldn’t even understand what I was saying; fortunately, they  understood that I was in a firefight. It lasted about three to five  minutes but it seemed like a lifetime. Finally relief came. When I heard  those Apaches sending down a trail of fire, I knew I would walk away.”

After he returned from Iraq, Credo admits to double barring the door at  night and sleeping with a gun under his pillow. When he talked to a  counselor, the older man said, “Whenever you kill your enemy, you kill also the man you used to be. The important thing is to become the best  man you now can become.”

“I have a responsibility to represent those who have not been as blessed  as I am,” Credo insists. “We have to support our veterans. It makes me  sick to see some of them unable to work, losing their homes, taking their traumas for as long as they can.

“I won’t play politics with the lives of our people. I put my heart in  this campaign. Every man and woman who supports me will not do so in vain.”

Editor’s note: This is a news release from a political campaign,  and our publication does not constitute an endorsement or political advertisement for the campaign.  Any candidate for public office is welcome to submit campaign releases to . These are published as our schedule allows.