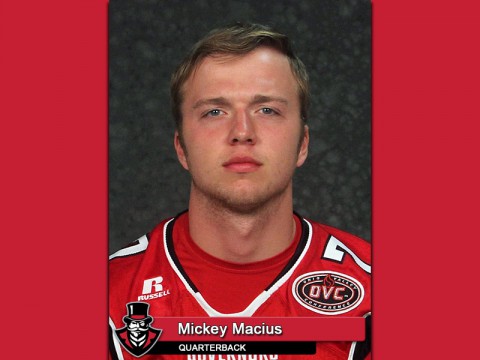 Macius completed 18-of-22 passes for 201 yards and three touchdowns in topping the rival Racers and giving the Governors their first victory since November 17th, 2012. His 81.8 completion percentage marked the first time an APSU quarterback had been above 80 percent since the 2003 season when the Govs were playing non-scholarship football.

All three of Macius’ touchdown passes went to fellow freshman Jared Beard, including a 30-yarder in the second quarter, a seven-yarder with 6:01 to play in the third quarter and a 14-yarder at the end of the third quarter that proved to be the game-winner.

The Arlington Heights, IL, native also completed an 11-yard pass to Beard with 2:40 remaining in the game that allowed Austin Peay to run out the clock and seal the victory.

Macius enrolled at APSU last January and took part in spring practice. He was considered a redshirt candidate through the season’s first two games against Memphis and Chattanooga.

However, he made his debut off the bench in Week 3 at Eastern Illinois and shared the quarterback duties with Darrien Boone through the next four games. However, Boone was injured against Mercer near half’s end, with Macius taking over complete duties.