With five blocks in the Govs’ home finale against SIU Edwardsville, Chris Horton passed Josh Lewis (257, 2000-03) to become APSU’s all-time shot block leader and with his 262 he is now second in OVC history behind Tennessee Tech’s Lorenzo Coleman (439, 1993-97).

Also in that same game, Horton was credited with 20 rebounds, becoming the first Governor since Tyrone Beck (22, February 5th, 1994) to grab 20 or more rebounds in a game single.

He led OVC in rebounding at 11.1 rpg, becoming the first Govs since Fernandez Lockett (2006-07) to do. But in averaging 11.1 Horton became the first Governors to average double-figure rebounds since Tommy Brown averaged 11.9 rebounds in 1990-91. 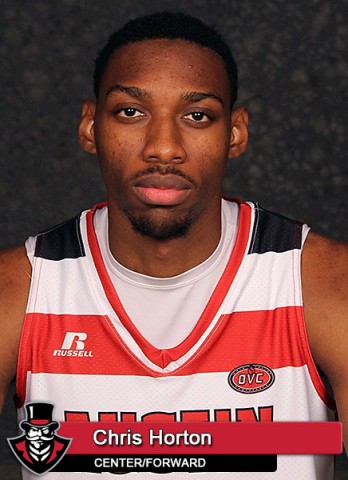 Horton will be one of three Governors starters returning in 2015-16, joining rising sophomore guard Josh Robinson (9.9 ppg, 12.1 ppg OVC), who scored in double figures in 12 of 16 league games, and rising senior guard Khalil Davis (9.8 ppg), who led APSU in assists in six of the final seven games. Robinson was named OVC Rookie of the Year by College Hoops Daily.