Clarksville, TN – Junior outfielder Patrick Massoni, of the Austin Peay State University baseball team, has been named the Copies in a Flash APSU Athlete of the Week.

Massoni was a catalyst from the lead-off spot last week for the Governors, hitting .615 (8-for-13) with a home run, two doubles, dour RBI and four runs scored as Austin Peay opened its Ohio Valley Conference scheduled with a sweep of Eastern Illinois.

The Danville, CA, native opened the series with a 5-for-5 effort – the first five-hit game by a Governor since Reed Harper in 2013 – that included a solo home run and a double, driving in two in the first game of Sunday’s doubleheader. 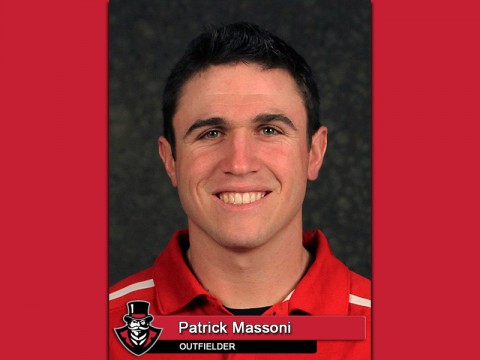 He and Clayton Smithson hit back-to-back home runs in the eighth inning, the first time a pair of Governors had gone back-to-back since P.J. Torres and Tyler Childress did it against UT Martin, April 1st, 2012.