Clarksville, TN – When Henrik Ibsen’s now classic play, “Ghosts,” premiered in London in 1891, some 10 years after the Norwegian playwright first published it, the reviews were harsh. The influential theater critic Clement Scott, writing for The Daily Telegraph, called it “an open drain: a loathsome sore unbandaged; a dirty act done publicly.”

For Scott and others in Victorian London, a play dealing with incest and venereal diseases seemed beyond profane, but today, the intense family drama is credited with helping usher in a new era in the world of theater. 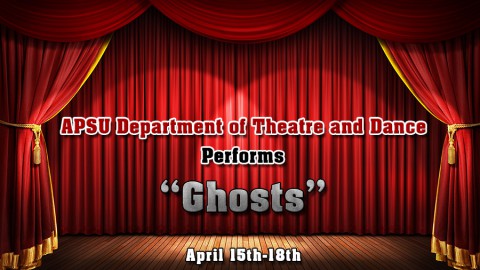 “Ibsen became known as the father of modern drama, by sort of kick starting realism in the theater,” Noel Rennerfeldt, Austin Peay State University assistant professor of theatre, said. “At that time, plays tended to be more melodramatic. They had distinct heroes and villains, and good always triumphed.”

“Ghosts,” influenced in part by a developing interest in sociology, offers a bleaker, more realistic view of life. The APSU Department of Theatre and Dance will conclude its 2014-15 season with performances of the controversial work, directed by Rennerfeldt, at 7:30pm, April 15th-18th, and at 2:00pm, April 19th, in the Trahern Theatre.

In 2000, theatre critic Charles Spencer, writing for The Daily Telegraph more than 100 years after Scott’s review, praised Ibsen’s work, writing, “The brilliantly compelling and claustrophobic plot, which so skillfully weaves together the past and the present, snaps shut on Mrs. Alving and her son Oswald like a cruel mantrap, leaving them whimpering and desperate in the murky gloom.

‘Ghosts’ is a pitiless play, which leaves both its characters and its audience without a shred of hope. Only the opportunists thrive.”