Clarksville, TN – On March 19th, 2015, William Lewis, a 27-year-old Clarksville resident, reported to Clarksville Police Officers a Burglary at his neighbor’s (victim) apartment at an apartment complex on the 800 block of Peachers Mill Road.

Lewis advised that two black males entered the victim’s apartment and ran out then got into a white Dodge Intrepid. Soon after Lewis’ report to Officers, the Officers found that Lewis had a warrant on file for Violation of Probation with Rutherford County and was arrested on scene. 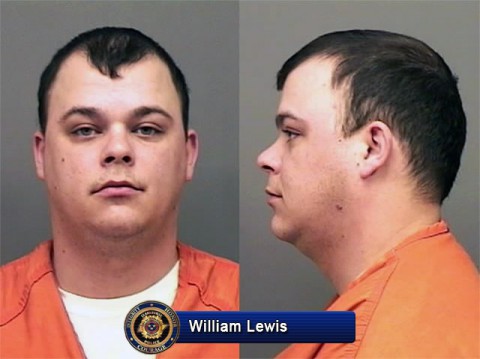 The stolen property included military gear, electronics, a 22 rifle and several rounds of ammunition. Along with the stolen property, Detective Sacco found a 12 gauge shotgun in Lewis’ apartment.

Lewis is a convicted felon (guilty of an Aggravated Assault) and is prohibited from possessing firearms. Finally, Detective Sacco went to Rutherford County and interviewed Lewis. Lewis admitted to breaking into his neighbor’s apartment and taking his missing items. He also admitted to making up the story about the two black males breaking into the apartment.

He is currently in the Rutherford County Jail and will be extradited back to Montgomery County when his charges are complete. Lewis has warrants on file with the charges of Possession of Firearm during Commission of Felony, Aggravated Burglary, and False Reports. His bond is set at $105,000.