Nashville, TN – Nashville Sounds pitcher Barry Zito has been named the Pacific Coast League Pitcher of the Week for the May 25th – 31st period.

The 37-year old was a perfect 2-0 in a pair of starts during the week, shutting out both the Sacramento River Cats and Las Vegas 51s through 14.0 innings of work. He was one of four hurlers to win two games over the week and the only pitcher with two starts to not allow a run. In addition, opponents batted .111 (5-for-45) off him, the third-best mark in the league. 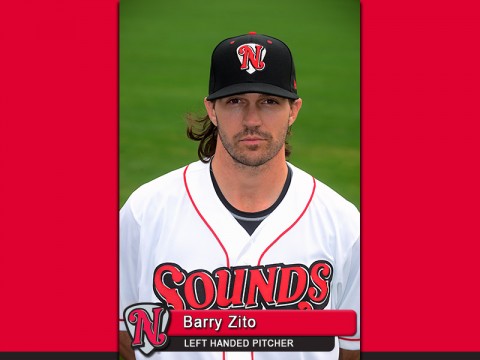 During his return to Sacramento (where he previously played in 2000) on Tuesday, Zito allowed just three hits and added five strikeouts over 6.0 scoreless innings.

He finished the outing by retiring the last seven batters he faced and pitched the Sounds to their fourth shutout win of the season.

On Sunday, the left-hander dazzled his way to 8.0 shutout frames against Las Vegas at First Tennessee Park. He faced the minimum through the first five innings and his outing was the longest by a Nashville pitcher this season. Zito allowed a season-low two hits, fanned a season-high six batters and also produced two double plays with his 103 pitches.