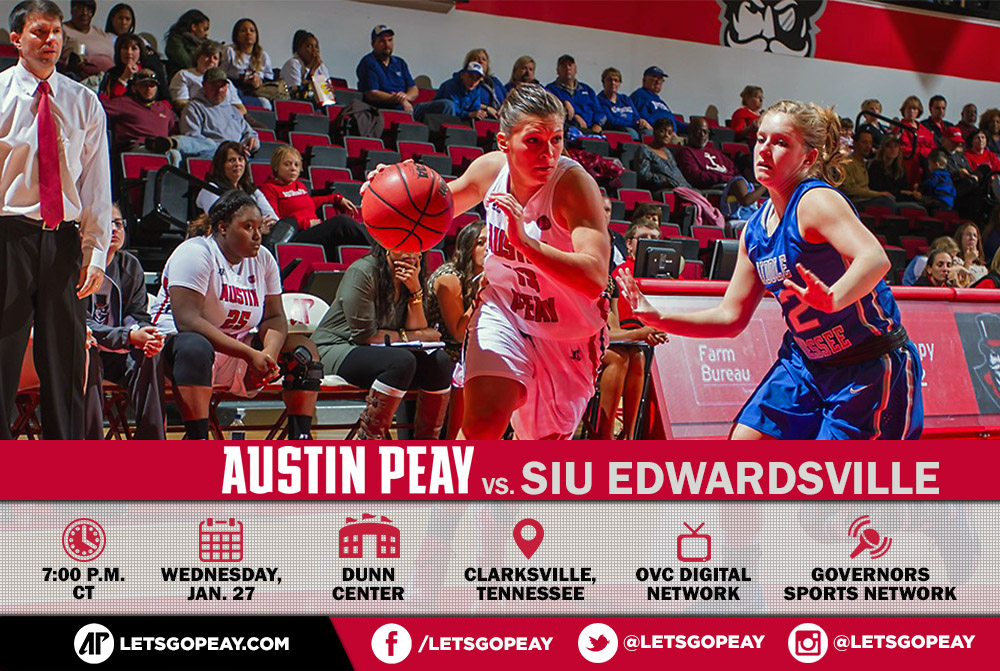 Clarksville, TN – A meeting of the Ohio Valley Conference’s Preseason Players of the Year will highlight a 7:00pm, Wednesday meeting between Austin Peay State University women’s basketball team and SIU Edwardsville at the Dunn Center. 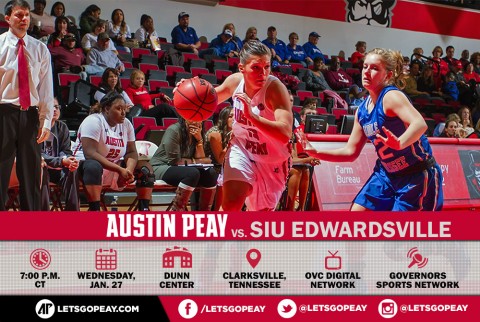 The pair have held up their end of the debate with each ranked among the OVC’s Top 10 in scoring, assists and steals per game.

They also have led their respective teams to the top of the OVC standings entering the fourth week of league play. Austin Peay owns a four-game home win streak and is out to a 5-2 start in league action, tied for third in the league. SIUE sits atop the league standings with a 7-1 record – one game clear of second-place UT Martin – and has won its last four OVC outings.

In its last outing, Austin Peay posted a dominating 80-45 victory, Saturday, against Eastern Illinois. The 35-point margin of victory was the Governors second-largest margin in an OVC contest. APSU posted a season-best 57.1 field-goal percentage, the fourth time in 2015-16 it has made 50 percent of more of its shots.

Gray led Austin Peay with a 17-point, six-assist outing against Eastern Illinois. However, she paced a balanced offensive attack that saw four players score 10 or more points while 10 different players scored. In addition, eight players recorded an assist during the contest.

SIUE held on for a 64-61 victory at Murray State, Saturday, using a 20-8 second quarter burst to build an advantage they saw dwindle to one point with 15 seconds left. Butts led the Cougars with a 28-point, eight-rebound outburst on 9-of-17 shooting.

Saturday’s contest will be the 11th meeting between Austin Peay and SIUE, with the Cougars holding a 7-3 series advantage. The two teams met three times in 2014-15 with SIUE winning each of the contests, including a 72-69 OVC tournament first-round decision.

Bank on Banks
Junior center Tearra Banks is in rarified air at the season’s halfway point, entering Wednesday’s game ranked 5th among Division I players in field goal percentage (61.5). Only one player in APSU history has finished a season shooting better than 60 percent – Gerlonda Hardin, who accomplished the feat all four years she played at Austin Peay and finished her career shooting 61.8 percent from the floor.

About the Austin Peay Lady Govs

Facing one of the nation’s toughest nonconference slates (27th ranked) took its toll early as APSU averaged just 59.3 points per game against its 11 Division I opponents.

It has popped the lid on its offense in conference action, averaging 80.3 points per game and topping the 80-point barrier five times in its first seven games.

Austin Peay has largely been the Gray and Banks show in 2015-16, with the duo combining to score 654 of the team’s 1385 points (47.2 percent). In the Govs Division I contests, Gray has been one of APSU’s top two scorers in all 18 while Banks has been one of the top three 14 times.

Among the rest of the roster, six different players have been one of the team’s top three, with redshirt freshman guard Falon Baker breaking into the top three eight times.

Shronda Butts has been the dominant offensive threat for SIUE this season, leading the team with 24.5 points per game in eight league outings. She has accounted for nearly a third of the team’s 602 points in league play and has taken 31 percent of the team’s shots – the second highest percentage in the OVC behind Tennessee Tech’s Samaria Howard (33.1 percent of her team’s shots).

End its four-game losing streak against SIUE… Be its first home win against SIUE since December 13th, 2008 (1st-ever meeting), ending a three-game home losing streak to SIUE… Be its fifth-straight home win, its longest home win streak since the 2008-09 season (7-game streak)… Make APSU 6-2 in OVC play, its best OVC start since the 2003-04 season (7-1 start)