The matchup between two of the OVC’s four co-leaders entering the day proved to be a heavyweight fight. The squads battled through 49 ties and 30 lead changes in the contest with only the second set won in wire-to-wire fashion.

But on a day that saw Austin Peay (14-7, 5-1 OVC) held to an anemic .087 attack percentage and only 48 kills in a five set match, Slay proved to be the key to turning the match around. Twelve of her 22 kills came in the final two sets – Austin Peay recording just 20 kills in those two frames.

SIUE (11-6, 4-2 OVC) appeared to have gained all the momentum with an impressive comeback in the third. The Cougars trailed 19-13 in the set but fought back to tie the set 20-20. Slay got the Govs to set point with a kill for 24-22 but SIUE won the next four points, including back-to-back kills by Ashley Witt to claim the set, 26-24.

The Cougars won the first two points of the fourth set, but the set quickly turned into a running battle between the two sides with 11 ties and five lead changes through the first 34 points, the Govs forcing the last tie with Cecily Gable‘s kill at 17-17.

Austin Peay took the lead on a SIUE attack error followed by a Christina White service ace for a 19-17 advantage. Slay chipped in two of her seven kills in the set over the final 6-4 run to win the set.

Slay made her presence felt to start the tiebreaker fifth set, post a kill and back-to-back solo blocks for a 3-1 lead. But again, the set was quickly tied by SIUE and that set off a succession of ties and lead changes. The ninth tie came at 12-12 when SIUE’s Jackie Scott leveled the set with a kill. But a SIUE error prevented a lead change and was followed by consecutive kills from Gable and Slay to win the match.

Slay’s match-high 22 kills came on 54 attempts and she finished with a .333 attack percentage. She also had 11 digs for her second double-double this season while adding two service aces and five blocks.

Austin Peay won despite being held below a .100 attack percentage for only the third time in 21 matches this season. The Govs recovered thanks to nine service aces, with Christina White leading that effort with three aces. Six Govs defenders finished with double-digit digs, led by Ginny Gerig‘s 21 dig effort.

Taylor Joens led SIUE with a 14-kill performance. The Cougars outhit the Govs with 57 kills and a .115 attack percentage. 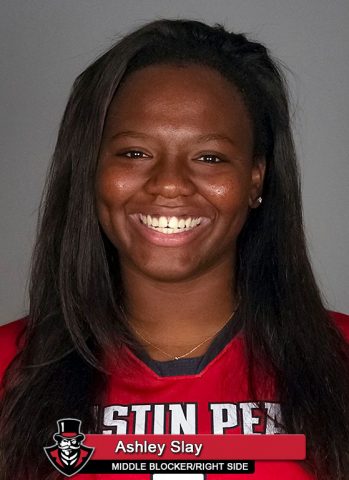 Slay Dominates Cougars
Slay’s 22-kill outing was the best by a Govs hitter in 2016. It also was her best career outing, breaking her mark of 19 kills set against Southern Miss last season. Her performance also hit the following milestones:

Still Acing  Away
Austin Peay leaned on its service game to help it claim Saturday’s victory, posting 9 service aces. While the Govs finished the match with 12 service errors, it was more effective in the service game than the Cougars which finished with only 4 service aces against 11 errors.

Still Atop The OVC
The Govs remained atop the OVC standings with the win. Murray State swept EIU earlier in the day to set the mark at 5-1, which the Govs matched. Jacksonville State, the league’s remaining 4-1 squad, will play Southeast Missouri tomorrow before traveling to Clarksville Tennessee.

Austin Peay, which remained tied for first in the OVC standings with Murray State, return home for a quick two-match OVC homestand. The Govs host Jacksonville State in a 6:00pm Friday contest at the Dunn Center.