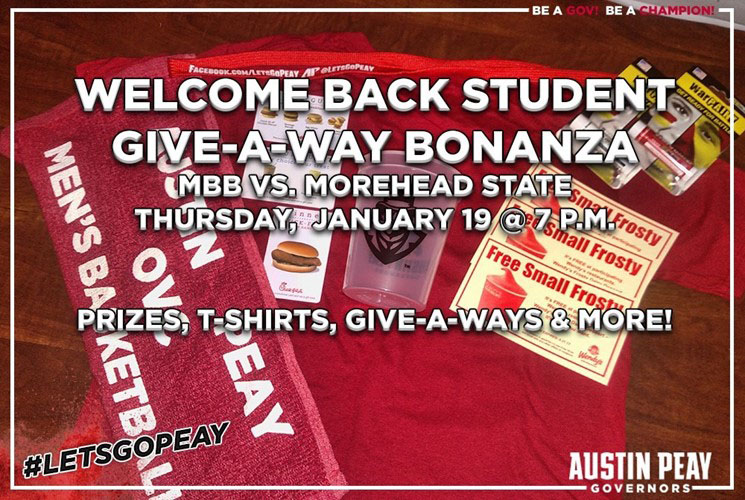 Clarksville, TN – Every Austin Peay State University student has the chance to be a winner when the Governors basketball team hosts Morehead State in a 7:00pm, Thursday contest at the Dunn Center. 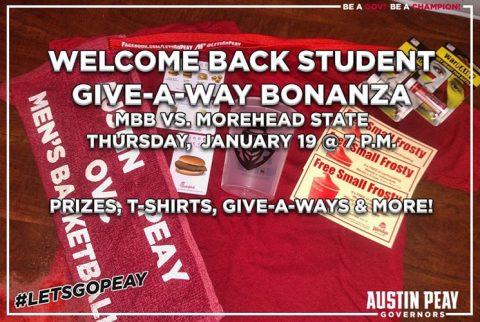 The Austin Peay athletics department wants to welcome all Austin Peay students back to campus with a special “Welcome Back Bonanza,” Thursday, with prizes for all students in attendance.

The first prize all students receive is free admission to the contest – something available to all main campus students throughout the season.

Partnering with several of its corporate sponsors, the Governors will have several give-a-ways before and during the contest. The first 100 students to arrive at the Dunn Center will receive a special Governors T-Shirt. Early arrivals also will have the chance to pick up rally towels, lanyards, drinking cups and war paint while supplies last. In addition, Krispy Kreme Donuts will be available to all students who arrive before tipoff.

During the contest, coupons to Wendy’s and Chick-Fil-A will be awarded during timeouts as every on-court competition will involve students. At halftime, Fortera Credit Union will sponsor a special $1,000 halfcourt shot for a lucky student. Michael’s Pizza also will present a special prize during the midgame break.

The Governors contest against Morehead State is the start of a four-game Ohio Valley Conference homestand for the men’s team, which brings a two-game win streak back to the Dunn Center. That homestand also will feature two doubleheaders with the women’s team – starting with Saturday’s Heritage Bank Battle of the Border twinbill against rival Murray State.