Tennessee County Unemployment Rates Decrease in all Counties for February 2017 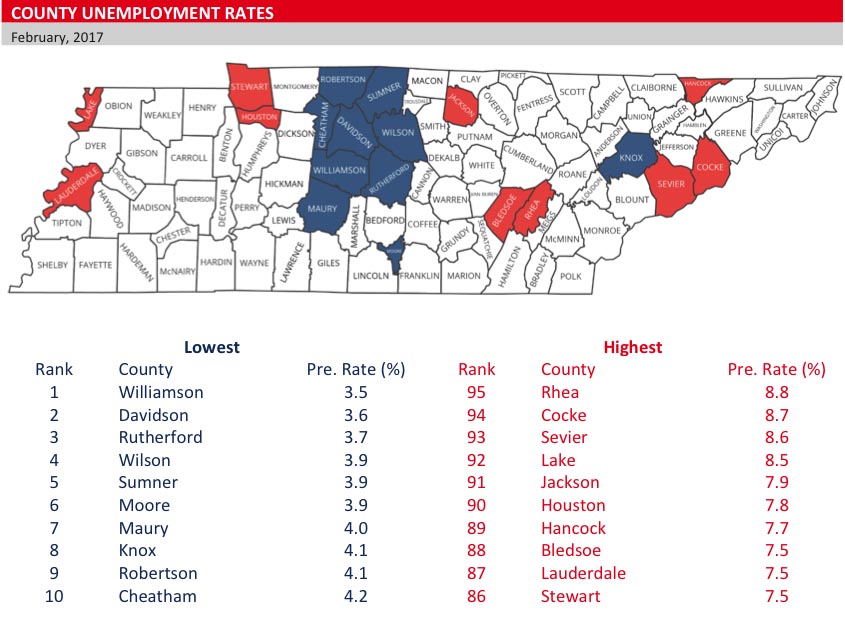 Nashville, TN – Estimates for February 2017 reveal Tennessee’s county unemployment rates have decreased in all 95 counties, according to data released today by the Tennessee Department of Labor and Workforce Development (TDLWD). 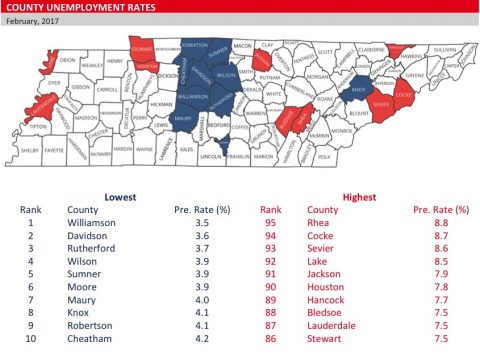 “Not only did the unemployment rate decrease in each of the state’s metropolitan areas, more importantly, the rates are down significantly in our counties with the most unemployed Tennesseans,” said TDLWD Commissioner Burns Phillips.

At 11.2 percent, Lake County had the state’s highest unemployment rate in January 2017.

Specific county information for the month of February is available online at http://tn.gov/assets/entities/labor/attachments/Labor_Force_Estimates,_Feb_17.pdf.

Preliminary unemployment rates for Tennessee and the U.S. have lowered by one-tenth of a percentage point in February. The decline places rates at 5.3 and 4.7 percent, respectively.

“In January, Tennessee had three counties with an unemployment rate higher than 10 percent but now, not one county reached that level,” according to Commissioner Phillips. “While many variables determine county monthly unemployment rates, February’s report is definitely a highlight, being this early into the year.”

The Economic Analysis and Labor Force Estimates are prepared by the Employment Security division’s labor market information specialists. The division reports metrics and contextual information as it relates to employment, income, and population in Tennessee. Labor force topics are narrated in monthly newsletters and additional resources are available on Jobs4TN.gov