Nashville, TN – Tennessee Governor Bill Haslam and Department of Labor and Workforce Development Commissioner Burns Phillips today announced the state unemployment rate fell to 3 percent in September, marking the lowest it has been since the U.S. Bureau of Labor Statistics began tracking the information in January of 1976.

Tennessee first marked a historic low unemployment rate in June at 3.6 percent, which was bested by the July rate of 3.4 percent, and then fell even lower in August to 3.3 percent.

“Since June, the state’s unemployment rate has been on a steady, record-breaking decline. Behind these history making figures are real working Tennesseans – people who get up and go to work each day to provide for their families,” Haslam said. “As a state, we have invested in our workforce through education programs like Tennessee Reconnect and Tennessee Promise, creating a workforce prepared to fill jobs and increasing the number of high-skilled Tennesseans.” 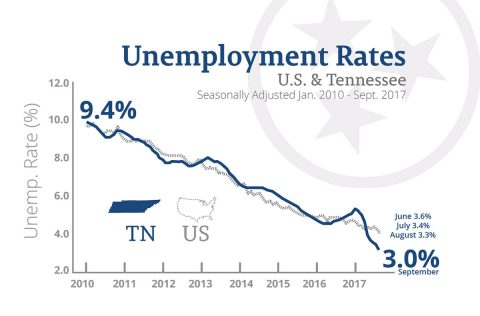 “The fact the unemployment rate is down nearly 2 percentage points from a year ago is great news,” Phillips said. “But if you look back to January of 2010, when the rate was above 10 percent, you can clearly see the progress Tennessee has made since then.”

More information on the unemployment rate, labor force and resources to help Tennesseans find jobs is available on www.Jobs4TN.gov

The county unemployment rates for September 2017 will be published on Thursday, October 26th, 2017 at 1:30pm CT