HomeSportsAPSU Football game against Murray State to be ESPN3 Game of the...
Sports

Brentwood, TN – The Austin Peay State University (APSU) football contest against Murray State in the Heritage Bank Battle of the Border will be featured as the Ohio Valley Conference’s ESPN3 Game of the Week, November 16th, 2019 the conference announced, Thursday. 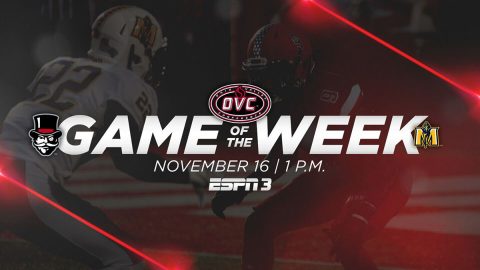 The game against the Racers is the Governors’ final road contest of the 2019 season, as the Govs seek to win three straight in the series against their rivals for the first time since winning five in-a-row from 1963-67.

In last season’s finale, the Govs defeated the Racers, 48-23, behind four touchdown passes, 254 yards rushing and a strong defensive effort that included a pick-six.

Austin Peay’s other OVC contests will be broadcast on ESPN+ through the conference’s agreement with ESPN, as will its two home non-conference games.

This marks the seventh season the league has produced the Game of the Week package in conjunction with Tupelo Raycom. Kevin Ingram, host of “The Wake Up Zone” on 104.5 The Zone in Nashville, will handle play-by-play duties while Bob Belvin will provide analysis. The duo has worked together each of the past seven years in the league’s TV package.

ESPN3 is ESPN’s live multi-screen sports network, a destination that delivers thousands of exclusive sports events annually. It is accessible on computers, smartphones, tablets and connected devices through the ESPN App. The network is currently available nationwide at no additional cost to fans who receive their high-speed Internet connection or video subscription from an affiliated service provider.

It is also available at no cost to U.S. college students and U.S.-based military personnel via computers, smartphones and tablets connected to on-campus educational and on-base military broadband and Wi-Fi networks.

This includes hundreds of MLB, NHL and MLS games, Grand Slam tennis, Top Rank boxing, PGA Tour golf, college sports, international rugby, cricket, the full library of ESPN Films including 30 for 30, and more. Fans can subscribe to ESPN+ for just $4.99 a month (or $49.99 per year) and cancel at any time. ESPN+ is an integrated part of the completely redesigned ESPN App and also available on the web, iPhone, iPad, tvOS, Android Handset, Apple TV, Roku, Chromecast and FireTV.