HomeNewsUnemployment in Tennessee Drops in Every County in August
News

Unemployment in Tennessee Drops in Every County in August 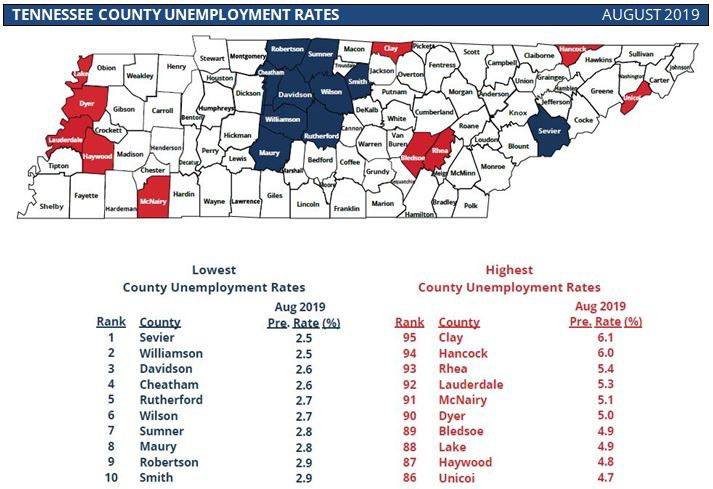 Nashville, TN – The Tennessee Department of Labor and Workforce Development (TDLWD) reports unemployment rates for each of Tennessee’s 95 counties dropped during August 2019 according to data it released Thursday.

The unemployment rate in Montgomery County was 3.8 percent in August, down 1.0 percent from July’s 4.8 percent. 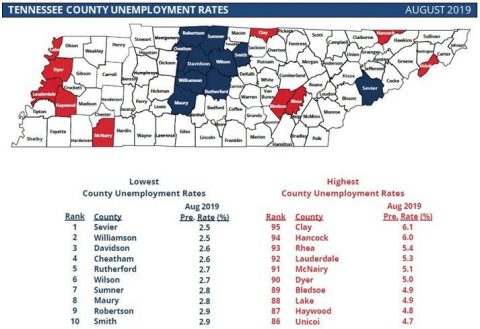 Unemployment is now less than 5 percent in 89 of the state’s counties. The August rates in six counties currently sit at 5 percent or greater.

“Many counties saw unemployment decrease by more than a percentage point in August, while several dropped by two percentage points,” said TDLWD Commissioner Jeff McCord. “To see lower rates in every county across the state is always a positive sign coming out of the summer months.”

Clay County recorded the state’s highest August unemployment rate at 6.1 percent, but that represents a 1.9 percent drop from July’s rate. At 6 percent, Hancock County has the second-highest rate which is 2.1 percent lower than the previous month’s statistic.

Nationally, the seasonally adjusted unemployment rate also remained the same in August at 3.7 percent for the second consecutive month.

The state of Tennessee offers a complete analysis of the August 2019 county unemployment rates through a report you can access with this link.

Job seekers can find more than 200,000 current openings from across the state on Tennessee’s workforce development website www.Jobs4TN.gov.