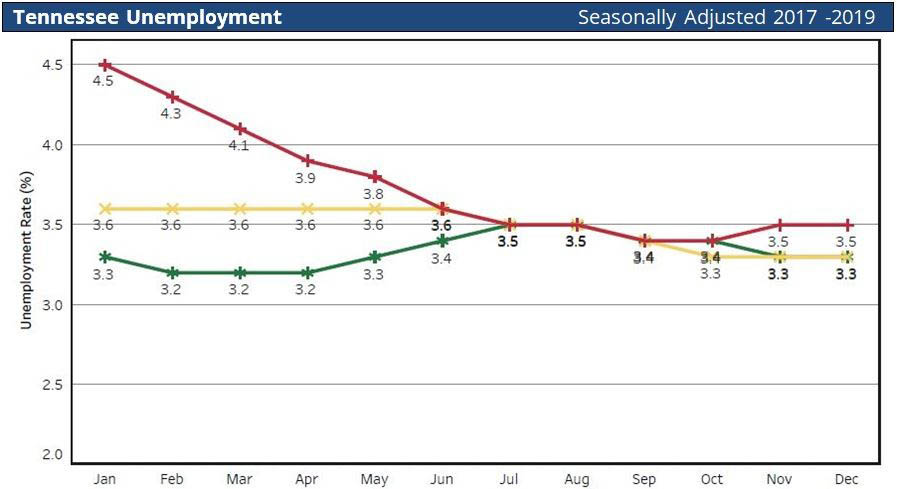 Nashville, TN – The state of Tennessee ended 2019 with steady unemployment that continued to sit near record low levels, according to new data from the Tennessee Department of Labor and Workforce Development (TDLWD).

For the second consecutive month, the state recorded a seasonally adjusted unemployment rate of 3.3%. 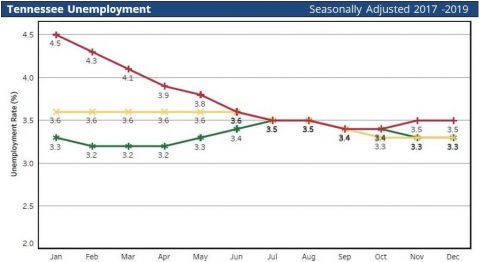 The December 2019 figure is 0.1 of a percentage point away for Tennessee’s all-time low unemployment rate of 3.2%, reached in February 2019.

When comparing rates from year-to-year, unemployment in December 2019 is at the same level it was in 2018.

“It’s good to start 2020 with news that unemployment held steady during the busy holiday season in December,” said TDLWD Commissioner Jeff McCord. “During the new year, we will continue working to help even more Tennesseans participate in meaningful employment.”

Over the last year, nonfarm employment in Tennessee jumped by 49,200 jobs. The sectors with the most significant gains include leisure/hospitality, professional/business services, and trade/transportation/utilities.

Nationally, unemployment also remained steady. The seasonally adjusted rated for December 2019 is 3.5%, the same as November’s rate. Year-to-year, unemployment dropped substantially in the United States, down 0.4 down a percentage point from December 2018.

TDLWD has prepared a complete analysis of the latest unemployment statistics. You can find that information by following this link.

Tennesseans searching for new employment in the new year will find a variety of online resources by logging onto the state’s workforce development website, www.Jobs4TN.gov. They can also visit one of the over 80 American Job Center locations conveniently located in cities across the state.