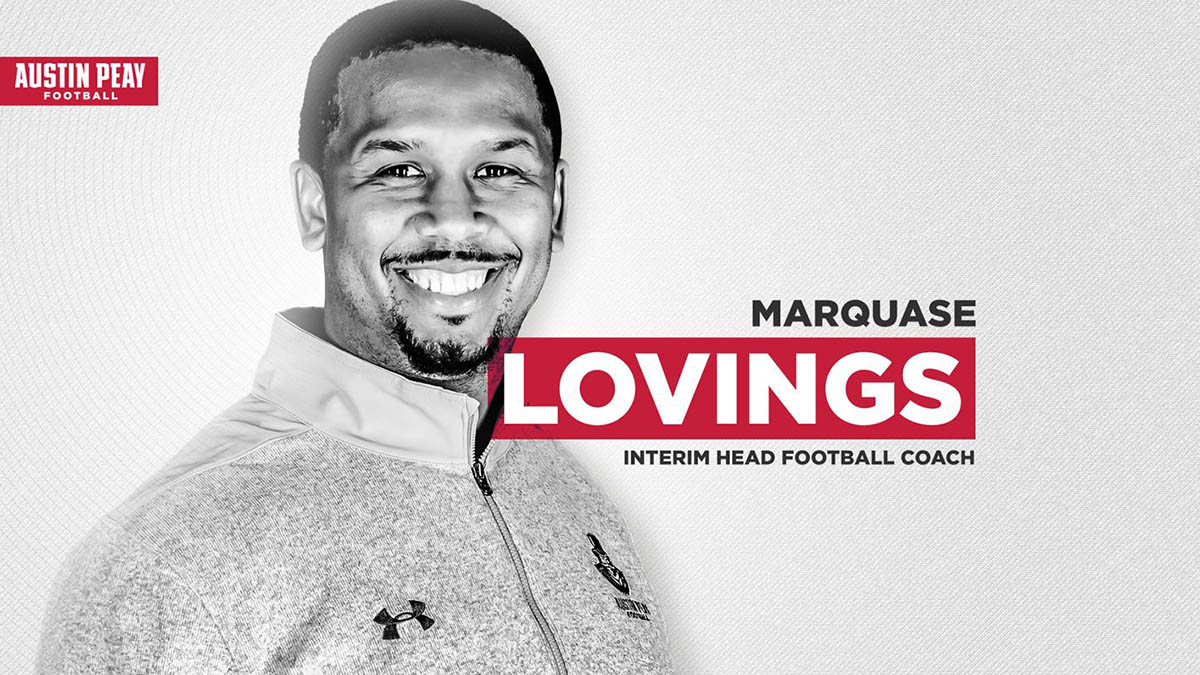 The move follows the resignation of Mark Hudspeth, Friday, for personal reasons. 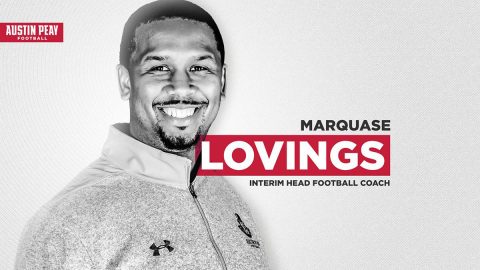 Lovings served as associate head coach for the Governors last season, overseeing the defensive line. Under his leadership, that unit helped Austin Peay State University’s 2019 squad post one of the best defensive seasons in program history.

“Marquase understands and shares my expectations for Austin Peay State University Football. Along with our outstanding coaching staff and dedicated Governors student-athletes I am confident we will continue on a positive trajectory. In short, Marquase is the right leader to lead this team.”

“I am excited to get started and humbled by the opportunity Gerald has given me,” said Lovings. “Really love the fact I get to lead these young men and blessed to have these coaches by my side. We will coach these young men with love and respect but will still be demanding. We want Clarksville and Austin Peay State University to be proud of this football team both on and off the field.”

In 2018, Lovings was selected to participate in the American Football Coaches Association’s Coaches’ 35 Under 35 Coaches Leadership Institute, which is designed to identify and train rising leaders in the game of football and the coaching professions. He also was a presenter at the 2019 AFCA Convention.

Prior to joining the APSU Governors, Lovings was defensive line coach at Nicholls after seven seasons as an assistant at Louisiana-Lafayette.

After spending his first six seasons as the running backs coach at ULL, Lovings moved to defensive ends coach in 2017. The Ragin’ Cajuns finished with 61.5 tackles for loss and 20.0 sacks, led by defensive end Joe Dillon’s 4.5 sacks.


Under Lovings’ tutelage, former Ragin’ Cajuns running backs Elijah McGuire and Alonzo Harris combined to rush for over 3,800 yards and 48 touchdowns during a two-year span (2013-14) that saw each earn All-Sun Belt Conference honors. In 2014, the tandem combined to rush for 2,071 yards and 26 touchdowns with McGuire earning Player of the Year and Offensive Player of the Year honors by the Sun Belt Conference. As a result of their success, Lovings was a nominee for the 2014 Broyles Award, given annually to the top assistant coach in the country.

During the 2013 season, the duo each combined for over 1,800 yards and 22 rushing touchdowns on the season and each earned first-team All-Sun Belt Conference honors in 2013. Harris finished third in the league with 942 yards and 14 touchdowns while McGuire recorded 863 yards, averaging 8.3 yards per carry, while scoring eight TDs and earning Freshman All-America honors.

In 2011, Lovings helped Harris, then a freshman, emerge early in the season, finishing the year with 700 yards and eight touchdowns to earn Sun Belt Freshman of the Year honors.

Prior to his time in Lafayette, Lovings spent four seasons at Mississippi State (2007-10), his first two as a defensive quality control coach and his final two seasons as a defensive graduate assistant that saw him work with defensive line standouts Fletcher Cox and Titus Brown.

Lovings walked on as a tight end at Howard University and earned his bachelor of arts in broadcast journalism in 2006. He earned a master’s of science in sport administration from Mississippi State in 2008 and pursued a doctorate as well.