Tampa, FL – The national gas price average increased just one cent to $2.18 on the week despite a dip in United States demand for gasoline and gasoline stocks increasing by 1 million bbl.

The slight drop in demand – 47,000 b/d – amid the increase in stocks comes as many states report increases in COVID-19 Coronavirus cases, potentially causing Americans to reconsider outings.

However, for motorists who hit the road for the Independence Day holiday, gas prices were a welcome sight.

“Independence Day weekend gas prices were nearly 60 cents cheaper than last year and on top of that, they were the most inexpensive prices seen for the holiday since 2004,” said Jeanette Casselano, AAA spokesperson.

Beyond typical fluctuation at the pump, on the week a few states saw prices jump due to fuel tax increases on July 1st. This includes California, Illinois, Indiana, Iowa, Nebraska, South Carolina and Maryland. 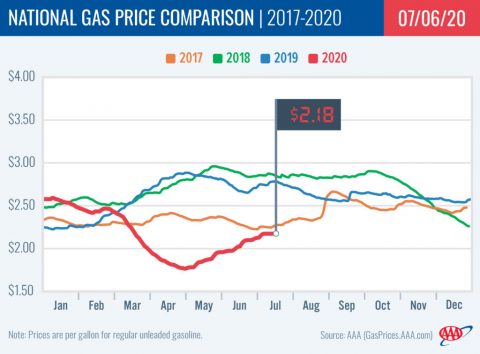 Washington, D.C. (+6 cents) saw the second highest weekly increase in the country and the largest jump among Mid-Atlantic and Northeast states on the week. However, for all other states in the region, gas price fluctuation was minimal. Eight states saw no change at the pump while others only experienced a one to two cent increase or decrease.

Regional stocks held above 75 million bbl with EIA’s report showing a small dip from 75.4 to 75.2 million bbl. The mostly stable hold on stocks helped to keep gas price fluctuation to a minimum in the past week.

With a one cent increase on the week to $2.47, Colorado carries the most expensive gas price average in the Rockies region and ranks as the 7th highest in the country. Also seeing pump price increases since last Monday: Utah (+3 cents) and Montana (+1 cent), while gas prices held steady in Idaho ($2.34) and Wyoming ($2.11).

For the first time since the end of May, gasoline stocks built for the region. Stocks added a modest 170,000 bbl to jump to 7.4 million bbl. At 85%, the region is home to the highest refinery rate in the country. This should encourage low volatility in the region in the coming month.

According to EIA’s latest weekly report, total gas stocks in the region increased from 29.8 million bbl to 30.3 million bbl last week. Increasing stocks will likely contribute to slowing pump price increases this week in the region.

With an eight cent increase, Florida ($2.10) was the outlier among the South and Southeast states on the week. All other states in the region either saw a decrease or pump price averages hold steady on the week. These states saw the largest decrease at two cents: South Carolina ($1.91), Texas ($1.87), Oklahoma ($1.88) and Tennessee ($1.93).

With a build of nearly 1 million bbl, the region saw the largest increase in gasoline stocks of any in the country. The addition bumps total stock levels to 91 million bbl. The increase is likely due to a number of states reporting high increases in COVID-19 Coronavirus cases, which could be encouraging motorists to venture out less. 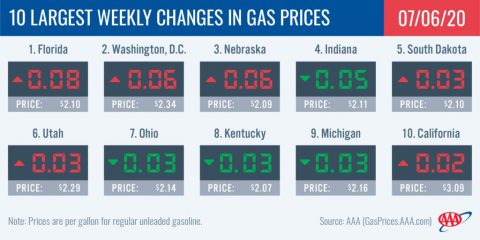 Gas prices are fluctuating across the region with some Great Lakes and Central States seeing increases and decreases of as much as a nickel. These six states rank among the top 10 with the largest weekly changes in the country this week: Nebraska (+6 cents), Indiana (-5 cents), South Dakota (+3 cents), Ohio (-3 cents), Kentucky (-3 cents) and Michigan (-3 cents). Part of Nebraska’s jump can be attributed to gas taxes that increased from 29.3 cents a gallon to 33.2 cents on July 1st.

For a second week, gasoline stocks decreased but not as dramatically as the previous week. This is contributing to dips in gas prices for many states. The latest EIA report shows stocks dipped by just 120,000 bbl to drop levels to 52.4 million bbl.

Decreasing crude stocks could mean that crude production is meeting demand as it continues to recover amid new coronavirus outbreaks around the world, which could suppress global crude demand during the second half of 2020.