Clarksville, TN – The Austin Peay State University (APSU) track and field team will kick off what has become a traditional visit to Vanderbilt, Friday night, with a trip to the Black and Gold Invitational in Nashville Tennessee. 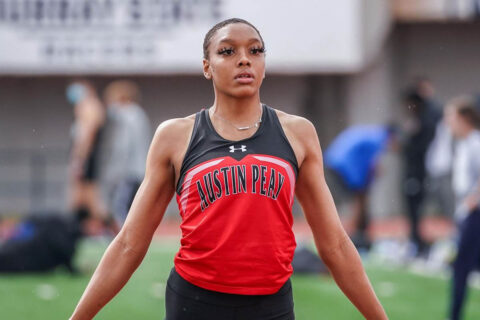 Prior to last season, when COVID-19 Coronavirus halted the outdoor schedule before it ever began, the APSUGovs had attended the event in seven of the previous eight seasons.

Now Austin Peay State University is back on West End and set to compete against a phalanx of programs from the host Commodores and Ohio Valley Conference foes Belmont, Murray State, Southeast Missouri, Tennessee Tech, and UT Martin, with student-athletes from Ball State, Butler, Southern Illinois and Xavier also set to compete.

Kenisha Phillips [1], who leads the OVC in the 200-meter dash and is among the top-65 runners in the NCAA East Region in the 100, 200 and 400-meters, will compete in Friday night’s 200-meter and return to compete Saturday in the 100. She’ll square off against Kenia Seals, who ranks one spot ahead of her in the league 100-meter dash lists, on Saturday in a 100-meter lineup featuring six of the region’s top-100 runners in the event.

Kori McDaniel [2] and Jackie Verseman [3], both challenging for top-10 spots in the shot put, will compete in both the shot and the hammer throw Friday evening. In addition, Sara Martin [4] will run in the 5000-meter Friday night as she continues her climb up the OVC standings.

The throws group with McDaniel, Verseman, Maria Hillyard [5] and Shyanna Chapman [6] will lead off Saturday with the discus and javelin, with Denia Hill-Tate [7] looking to improve her top-three standing in the league and her No. 70 ranking in the East region in the high jump.

In the pole vault, which begins 1:00pm Saturday afternoon, Karlijn Schouten [8] looks for her sixth-straight win in the event while Morgan Bradley [9] will make her season debut for the APSU Govs.

In the hurdles, Lennex Walker [10] and Kamille Dunbar [11] will jockey for position in the 100-meter event; Walker also looks to find her stride in the triple jump and long jump in her season’s first meet with both events on her schedule.


Friday evening action at Vanderbilt begins at 4:00pm; Saturday’s field events begin at 10:00am, with the track schedule starting at noon. Updates during the meet can be found on Twitter @AustinPeayXCTF, and a complete recap will be posted at LetsGoPeay.com after the meet.