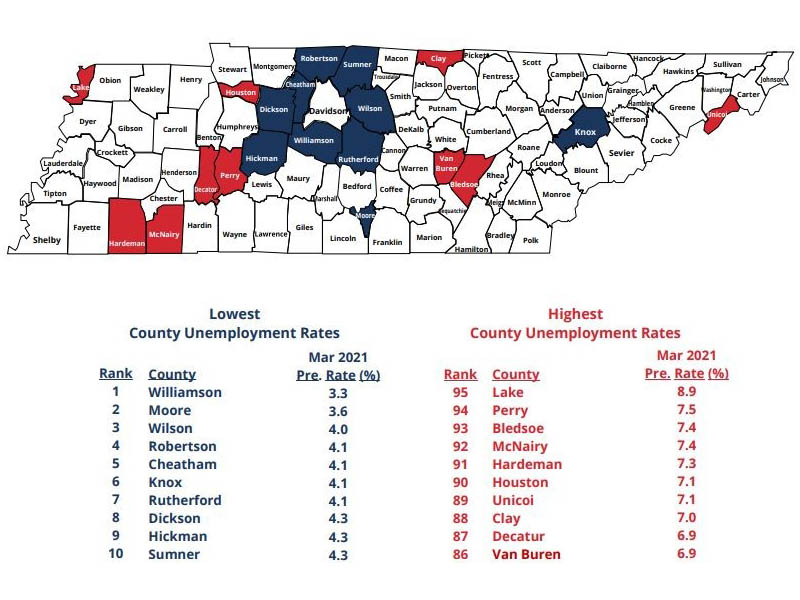 Nashville, TN – Following a slight rise in the statewide unemployment rate in March, jobless statistics experienced minor increases in most of Tennessee’s 95 counties, according to newly released data from the Tennessee Department of Labor and Workforce Development (TDLWD).

Montgomery County’s unemployment rate was 5.6% in March. This is up 0.3% from February. 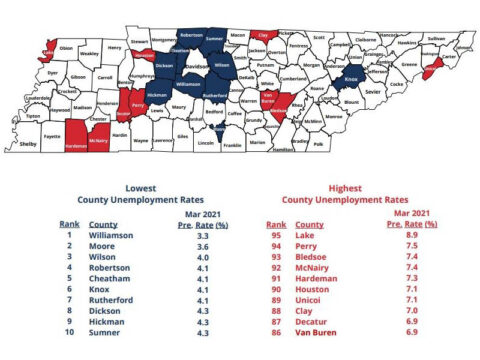 Five counties across the state did experience lower unemployment for the month, while rates went up in 86 counties, and remained the same in four counties.

Thirty-two of Tennessee’s counties had a jobless rate of less than 5%. The remaining 63 counties recorded a rate of 5% or higher.

Williamson County’s jobless statistic of 3.3% was the lowest in the state. Its March rate was 0.3 of a percentage point higher than it was in February.

Unemployment in Lake County decreased by 0.1 of a percentage point to 8.9%, which is the state’s highest rate for the month.

Statewide, seasonally adjusted unemployment inched up 0.1 of a percentage point to 5% in March.

Nationally, unemployment dropped 0.2 of a percentage point to 6%.

A complete analysis of the March 2021 Tennessee county unemployment data is available here.

The state offers online options for Tennesseans searching for employment. Currently, on Jobs4TN.gov, job seekers can find more than 240,000 open positions in a wide range of occupations and skill levels.

The Tennessee Virtual American Job Center www.TNVirtualAJC.com allows Tennesseans to research different programs, from different state agencies that can help them remove barriers to employment so they can more easily reenter the workforce.