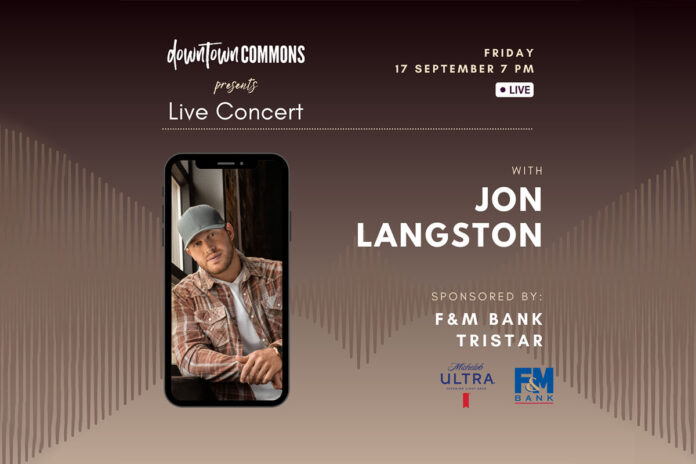 Langston grew up in Georgia and has worked with country music artist Luke Bryan on multiple tours and was recently signed under Bryan’s new label 32 Bridge Entertainment with EMI Records Nashville. Langston’s debut major label single, “When It Comes To Loving You” reached No. 1 on the all-genre iTunes Chart. His most recent single, “Now You Know”, reached the Top 30 on the radio charts.

Opening for Langston at 7:00pm is up and coming country singer/songwriter Dylan Marlowe, also from Georgia but currently living in Nashville, Tennessee. Marlowe signed a publishing deal with Play it Again Music in 2020. His latest single, released July 30th, is “Goodbye Gets Around.” Headliner Jon Langston will begin entertaining the crowd at 8:00pm.

“This is a major concert at Downtown Commons with a well-known country musician. We are thrilled to host Jon Langston and Dylan Marlowe,” said Downtown Commons Event Manager Elizabeth Quinton.

Local food trucks will also be set up before and during the shows. Driving You Donuts, Burgasm, Chick’nCone, Tennessee Kettle Corn, and Kadi’s Tacos and More are all expected to be on site. Tater Headz will also be open at the walk-up eatery on the corner of Legion Street and Third Street. Beer and other beverages will be for sale?, with all proceeds benefiting our featured non-profit, United Way of the Greater Clarksville Region.

Downtown @ Sundown concerts are free and open to the public and take place the first and third Fridays of each month through October. Chairs and blankets are welcome; however, pets, coolers, smoking/vaping or outside alcohol will not be allowed on site.

Downtown Commons is located at 215 Legion Street in  Clarksville, Tennessee.

Downtown @ Sundown is title sponsored by TriStar Beverage and F&M Bank and sponsored in part by Waste Connections of Clarksville.