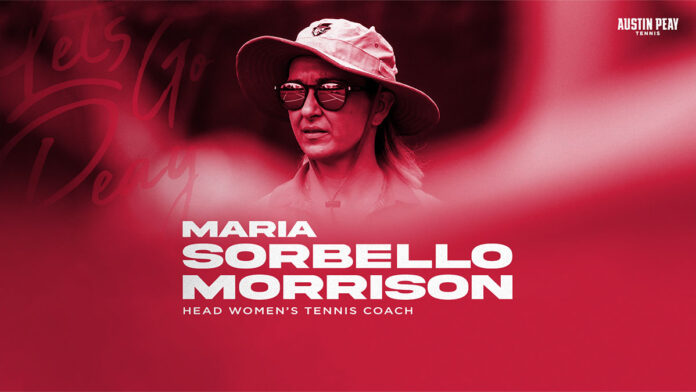 Ross Brown transitions to the Director of Tennis at APSU and remains the head men’s tennis coach – a position he has held since arriving in Clarksville in 2012. Brown was the longest-tenured head coach in women’s tennis history, leading the team for 10 seasons.

Sorbello Morrison joined Brown’s staff prior to the 2012-13 season and was promoted to associated head coach in November 2019.

“I could not be more excited to name Maria as the head women’s tennis coach,” said Harrison. “She deserves this opportunity and has earned it over the last 10 years. Coach Sorbello Morrison is a champion and will continue to build our championship program as we ‘level up’ to the ASUN Conference!”

With the help of Sorbello Morrison’s leadership, Austin Peay State University tennis captured five Ohio Valley Conference Championships and had three OVC Player and Freshman of the Year recipients. The Governors also had 43 All-OVC selections, with 23 from the women’s tennis program in the last decade.

“First and foremost, I want to thank Gerald for giving me the opportunity to lead the women’s tennis program,” said Sorbello Morrison. “Next, I would like to thank Ross Brown for all his mentorship. Ross has taught me what it takes to run a successful program and ultimately win championships. I look forward to leading the Govs and am excited for the future.”


After having her first season as associate head coach cut short by the COVID-19 pandemic, Sorbello Morrison and Brown led the Govs to a second-straight OVC Championship in 2021. Leder was named the fourth OVC Freshman of the Year in program history and took home First Team All-OVC honors, while Fabienne Schmidt and Morris received Second Team All-OVC recognition. Schlossmann also was named a Second Team All-OVC recipient as a freshman.

In 2018-19, the APSU women’s team enjoyed its best season in program history, ultimately claiming an undefeated regular season and a conference tournament title. In the regular season, the women’s team posted a perfect 20-0 mark that included 15 sweeps and an OVC Women’s Regular-Season Championship. In the OVC tournament, the Governors swept Southeast Missouri and UT Martin en route to an OVC Tournament Championship and the program’s second trip to the NCAA Tournament.

In her first season at Austin Peay State University, Sorbello Morrison helped coach the men’s team to an Ohio Valley Conference title, taking them to play in their first-ever NCAA Tournament to face 10th-ranked Mississippi State in the first round. Sean Bailey, Jasmin Ademovic, and Dimitar Ristovski all earned First-Team All-OVC recognition.

Sorbello Morrison and Brown led the men’s team back to the OVC Tournament the next two seasons, reaching the semifinals and finals, respectively. Under her help, Jasmin Ademovic and Dimitar Ristovksi received First-Team All-OVC awards and Aleksas Tverijonas was named Second-Team All-OVC in 2014. In 2015, the men fell just short in the final but seniors Dimitar Ristovski and Aleksas Tverijonas were named First-Team All-OVC and won their singles matches in the championship match.


The Governors have regularly assisted the Austin Peay State University and Clarksville community as well, with the women being named the ITA Community Service Award winners for the Ohio Valley Region in four of the last five seasons.

Sorbello Morrison graduated from Tennessee in 2011 with a degree in communications. She was a four-year member of the Lady Vols tennis team where she was an All-SEC and All-SEC Tournament selection in 2010 and 2011.

Sorbello Morrison is 16th all-time in career doubles victories at Tennessee and is tied for 13th all-time in doubles wins in a season with 31 in both 2009 and 2010.
Facebook
Twitter
Pinterest
Email
Print
Previous articleNashville Sounds fall behind early, roar back for 8-5 win over Indianapolis Indians
Next articleNew Tennessee Laws that benefit First Responders, Emergency Services go into effect July 1st