This nighttime lantern tour of the historic state park offers visitors insight into aspects of local history not readily available, and, too often, not pursued. Moving along softly illuminated trails, re-enactors share the area’s secrets for willing ears.

In what is hopefully to become an annual event, the Port Royal Historic State Park, now listed as an official Trail of Tears Park, staged their Lantern History Tour. The tour was not a Halloween fright-type of celebration, but rather an effort to share the history of this most under-appreciated area of Montgomery County and it’s contributions to Clarksville’s history. The Lantern Tour is the result of the combined efforts of The Friends of Port Royal and the Port Royal Park staff and supporters. The event, which was free to the public, ended with a roaring bonfire, toasted marshmallows and hot cider.

Entering the park along and down the candle-lit pathway, visitors first encounter a Longhunter, Colonel John Montgomery, played by Michael Ramsey, an APSU student and volunteer at Mansker Station in Goodlettsville. The colonel’s story relates experiences of his life spent trapping in Port Royal and exploration of the region in 1771. Leaving the colonel with his trusty long rifle, visitors move further on into the park, guided by illuminated mini-torch baggettes.

Next on the trail is an early settler woman, Susannah McFadden, portrayed by Silvia Britton, also a Mansker Station volunteer. Susannah relates the experience of living on the new frontier, its hardships, her surprises and her experiences of taking pioneers into the new frontier of 1790. She is an unusual entity, being a woman frontier guide in 1790.

The woods are thick, as next, Doctor George Hopson welcomes visitors to his encampment. He bids everyone gather round close. Portrayed by Sam Reed in true period dress, the doctor authors the one truly spooky element of the tour, the events, history and legend of the Bell Family and the Bell Witch. It’s best to hear these details directly from the good doctor. It’s said she listens out for her name. 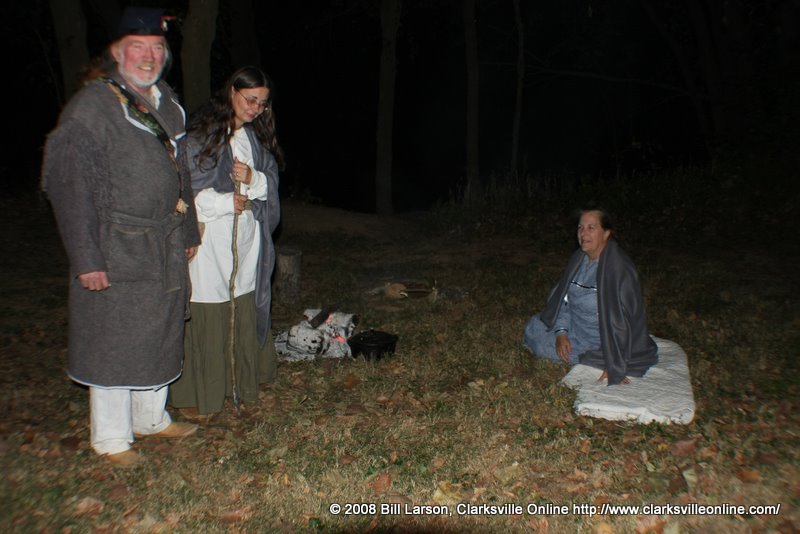 Having bid the doctor thanks, the path next leads to a truly sorrowful acknowledge of mankind wronged by fellow man. Clad in leggings, with cap and rifle, puffing on a long stemmed pipe, with his Native American wife and her mother, a Scottish trading post merchant who married a Cherokee woman and refused to abandon her and his children, tells of how they were forced onto the Trail of Tears in 1838. Portrayed by “Red” Kirby, Virginia Moore and Philenese Slaughter, respectively, the saga of having been given land and a promise of ownership unto perpetuity by General Jackson himself, having then built a trading store business and started a family, he lost it all when the forced relocation of the Native American Nations of North Carolina, Kentucky, Georgia and Alabama forced itself upon his little corner of the world. Refusing to abandon his Cherokee wife and children, he was stripped of his property and they were made part of the Trail of Tears to the Oklahoma Territory out West. As this saga ends, we leave their encampment with the low-burning fire and the women wrapped in their diseased-infected blankets, looking forlornly back to the East, to their Tennessee hill country home. 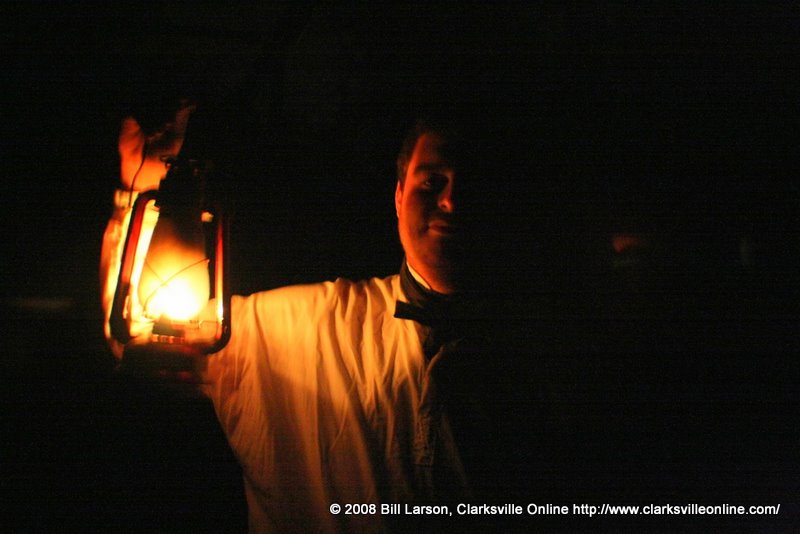 Leaving the fading embers of the Trail of Tears fire, next one progresses up the path to encounter next the unfortunate, or unscrupulous, A.D. Carden, a primary commissioner of Port Royal’s silk mill venture. Carden is portrayed by Michael Fullbright, a seasonal interpretative ranger with Dunbar Cave Park. Carden tells of how the silk mill business started out, proving quite profitable and how the commissioners decided it prudent to upgrade their operation, entrusted Mr. Carden with $30,000 to purchase the new machinery in England. However, Carden disappeared afterwards without a trace, never to be heard from again and with no explanation to the commissioners. As they had entrusted him with the sum of their money, the mill operation failed. Carden’s fortunes and fate remain unresolved. [Ed. Note: State Archives record note no silk mill operation in Port Royal, only an attempt to start to one which failed when Carden disappeared with the funds.]

As Mr. Carden fades back into the dark towards a rustic bridge, the tour moves out towards the park’s interpretive center. Illuminated by the glow of kerosene lamps on a wooden writing table, 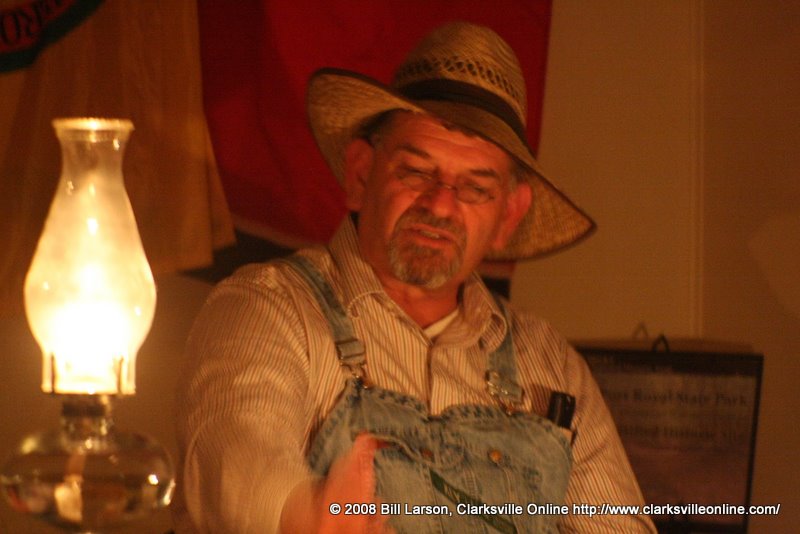 Henry Winter, portrayed by Tim Henson, historian, begins to talk of the 1900 to 1915 time known as The Tobacco Wars. These turbulent years in Tennessee and Kentucky focused on efforts of tobacco farmers to be paid decent prices for their tobacco crops and the market manipulation tactics of the tobacco giants to suppress the prices. Southerns are, by habit, resistant to unions and organized groups, however the farmers saw joining together as their only recourse in the battle the tobacco companies waged.

Voluntarily membership was their ploy, at first, but as the tobacco companies began to apply strong-arm tactics and persuasion, the farmers’ groups resorted to violent enlistment and compliance. These intimidating groups rode across the region at night and thus were known as Night Riders. They launched attacks on the tobacco companies warehouses and threatened area farmers with violence and physical harm if they did not join the association or if they sought to make separate deals with the tobacco companies. There were white and black Night Rider groups, as the South was still very much a segregated society, even in the farm land. The Tobacco Wars made an already difficult life even more desperate as every aspect of the economic and social life of the people was impacted by the shortage of funds and the inability to pay debts or even pay tithes to the local churches.

Leaving the interpretative center, head for the bonfire and refreshments of mulled cider and toasted marshmallows. The warmth of the fire is a perfect setting for questioning the re-enactors for more details of their histories and that of Port Royal and Adams. Make plans for next year’s Lantern Tour of Port Royal State Historic Trail of Tears Park and learn a bit of the history of our community firsthand.