HomeTech/ScienceWhy do we talk loud into our cell phone?
Tech/Science

Why do we talk loud into our cell phone? 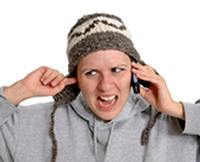 One prime example of bad cell phone etiquette is people yelling into their cell phones. Have you ever noticed how people talk much louder into the cell phone than a regular phone? It’s very common, and can be extremely annoying for all those nearby.

A lot of people will excuse themselves into another room when taking a call, but there are some times when you can’t leave. For example, when you’re riding in a car with someone, you might need to take a call, and there’s no “other room” you can go into. It is times like these when cell phone etiquette is of the utmost importance.

So why do people with normal speaking volumes yell into their cell phones? It’s a pretty simple explanation, actually. Household telephones, or landlines, have a microphone in the receiver that amplifies your voice into the ear piece. When you talk into a landline, your voice is captured and replayed through the ear piece, so you hear your own voice loud and clear.

It’s very similar to how a radio DJ wears headphones, then speaks into a microphone and hears his own voice in the headphones. With cell phones, your own voice is not amplified into the earpiece, so the only sound you hear is from your mouth.

Seem like this wouldn’t be a huge difference, but the volume level of words coming from your mouth through the air and into your ear is a pretty big difference from sounds coming from a phone speaker that’s pressed directly against your ear.

Cell phones are very common in society, but relatively speaking, they’re still pretty new. Unless you’re a teenager, you probably grew up in a time when household phones were the norm, and therefore you are subconsciously trained to act as though every phone operates like a household phone. So it’s no surprise that when most of us made the switch from landlines to cell phones, we carried over a bunch of our habits.

Now we hear our own voice as much softer while speaking into our cell phones and the natural reaction is to speak up.

Perhaps one day cell phone companies will decide to incorporate the same voice-amplification technologies into cell phones that were commonly used in landlines. But it’s probably not going to happen. Cell phones are here to stay, so we all need to adapt and start practicing proper cell phone etiquette.