Robinson, a native of Tacoma, WA, received the medal in what he said was the first combat action he had seen in Afghanistan.

“I bet you can remember the first time each of you saw your first action,” Casey said to the formation. “Now, did you all respond the same way Spc. Robinson did?”

Casey went on to tell the stories of recent Medal of Honor awardees and how Robinson’s actions were also in keeping with the finest tradition of heroism and courage under fire.

The Army chief of staff said Robinson’s actions are an example of what kind of courage is spoken of when talking about heroes. 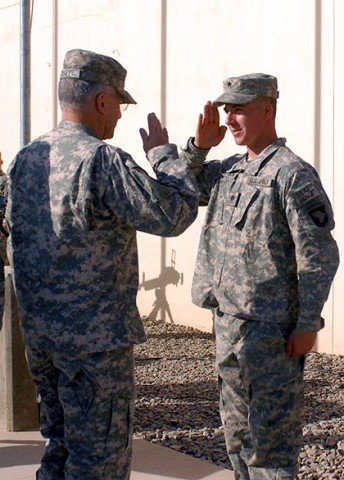 Robinson explained the events that resulted in his receipt of the Silver Star Medal from actions at the 5th Afghan Border Police compound near Combat Outpost Zerok.

“I was on guard and it was a typical morning. I think I had a six-hour shift that night. There was a (combat logistics patrol) that was driving to COP Zerok, where the rest of my company was and they had been getting hit that morning,” Robinson said. “I heard Apaches firing and .50-(caliber machine guns) all morning, and then it got quiet.”

He said it was about 15 minutes before he got off of his guard shift when a mortar round landed roughly 20 meters in front of his guard tower.

“It knocked me back and when I got up I saw an explosion like nothing I had ever seen before going off,” Robinson said. “Then gunfire erupted from every possible side you could imagine.”

Robinson grabbed a PKM machine gun, fired, and killed an insurgent who carried a rocket-propelled grenade launcher about 35 meters outside of his guard tower.

“There were about 15 more (insurgents) who were coming closer with PKMs, RPGs and AKs,” Robinson said. “So I just shot all the ammo I could at them. Then a 240 was brought up because more people were coming up, so I used that.” 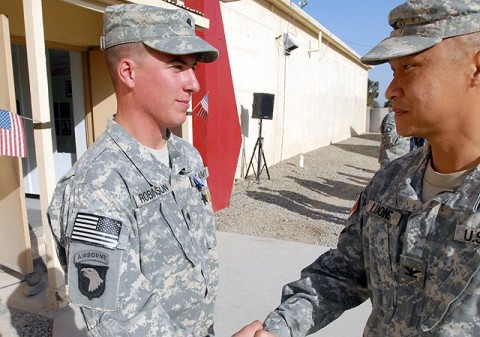 Another mortar round went off about the same time he ran out of ammunition on the M240B. He then grabbed an AK-47 from one of the border policemen and began shooting the remaining enemy, eventually killing a suicide bomber who was nearly 50 feet away.

Even though the incident lasted only about seven minutes, Robinson said he was able to fend off 15 to 20 insurgents.