The battalion, based out of Joint Base Elmendorf-Richardson, Alaska, was assigned to the 101st Sustainment Brigade. They provided logistical support to nine task forces in the 14 provinces of Regional Command East and Capitol during their yearlong deployment in support of Operation Enduring Freedom.

The 142nd CSSB, based out of Fort Bliss, TX, will now take on the mission as well as command and control over eight separately deployed companies.

“The battalion is trained and prepared to provide command and control, logistics support, perform convoy operations, and develop long lasting partnerships with the Afghan people,” said Lt. Col. Jose Solis, the commander of the 142nd CSSB, during the ceremony.

After the 17th CSSB colors were cased during ceremony, the soldiers of the Headquarters and Headquarters Company prepared to head back to rejoin the 3rd Maneuver Enhancement Brigade and Joint Base Elmendorf-Richardson.

The eight companies falling under the CSSBs during their deployment include active duty, reserve and National Guard units from across the United States. The companies’ missions vary from tactical convoy operations to maintenance to container management to ammunition resupply. 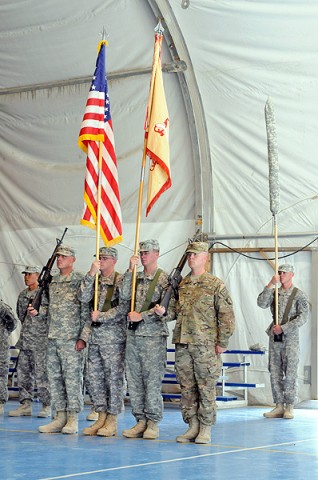 During the ceremony, Solis addressed the companies lined across the clamshell auditorium, who are now under the banner of Task Force “Wagon Master.”

“I am confident that the success to our mission will depend on everyone here today,” Solis said. “We are a team, a family! Always keep in mind that you are the best no matter the challenges and situations presented. You positive attitude, enthusiasm and commitment to duty will help you achieve beyond expectation.”

Among the other missions, the 142nd CSSB will also continue the 17th CSSB’s partnership missions with the Afghan National Army across RC East.

“Each of you has made a lasting difference in support of Operation Enduring Freedom by sustaining U.S. and coalition forces in Regional Commands East, North and South,” said Lt. Col. Leslie Caballero, the commander of the 17th CSSB, during the ceremony, “and conducting combined action with the Afghan National Army at Gamberi and Gardez.”

The battalion also provided support to the Kabul Base Cluster in RC Capitol with a Forward Logistics Element of officer and noncommissioned officers from the battalion staff. 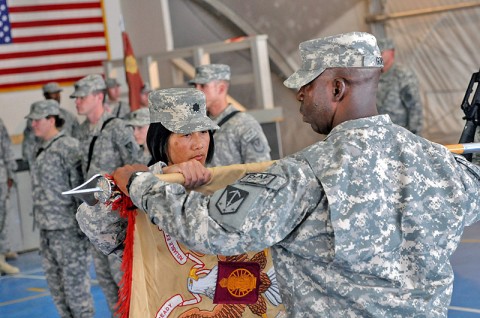 As the 17th CSSB prepared to head back to the states, several of the other companies which fell under Task Force “Always Ready” redeployed to their home station, and some to their civilian lives.

“There’s kind of a mass RIPTOA currently happening in this task force and we’re about to give the reins to the 142nd,” Cabellero said prior to the ceremony.

“And within the last 90 days, we’ve had five companies transition out. We’re a multi-component task force which consists of eight units: four active duty, two National Guard and two reservists. So this is a very complex organization on top of a very complex environment.”