May 22nd is National Maritime Day, first declared so by Congress in 1933.

Today is National Maritime Day which honors the contributions of the American Merchant Marine, civilian men and women who have defended the freedom of the United States since 1775, and who collectively carried out the largest sealift the world has ever known during World War II. The day also acknowledges maritime industry’s contributions to the nation’s economic and national security.

Observance of National Maritime Day also honors the maritime industry and the benefits it brings Americans in terms of transportation, jobs, goods, and recreational opportunities. The Ingram Barge Company is but one of many Tennessee companies involved in the Martime Transportation Industry.

This year, the Smithsonian Institution’s Museum of American History opened a new exhibit, “On the Water: Stories from Maritime America” on Maritime Day, and the Maritime Administration’s observance of that special day was conducted at the exhibit’s opening ceremony inside the museum on May 22, 2009. The new maritime exhibit is part of the museum’s larger transportation exhibit, “America on the Move.”

Background: The Voyage of the Savannah 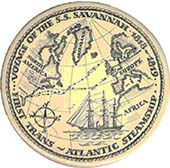 On May 22, 1819, the SS Savannah left its home port of Savannah, Georgia on its way to Liverpool, England. The ship “put to sea with steam and sails” and reached Liverpool in 29 days and four hours, becoming the first steamship to cross the Atlantic. While the steam engine performed faultlessly, it was not the only means of propulsion; historians have estimated that the Savannah was under sail 80% of the time. Nonetheless, it was an impressive achievement, one that signaled the beginning of the era of steam, and American technological leadership. There are several web sites with more information on the SS Savannah; one of the more complete pages is on the Historic Speedwell site.

1933: Congress Declares May 22 to be National Maritime Day

By a Joint Resolution passed on May 20, 1933, Congress declared May 22nd to be National Maritime Day. This is the text of the resolution:

Whereas on May 22, 1819, the steamship The Savannah set sail from Savannah, Georgia, on the first successful transoceanic voyage under steam propulsion, thus making a material contribution to the advancement of ocean transportation: Therefore be it Resolved by the Senate and House of Representatives of the United States of America in Congress assembled, That May 22 of each year shall hereafter be designated and known as National Maritime Day, and the President is authorized and requested annually to issue a proclamation calling upon the people of the United States to observe such National Maritime Day by displaying the flag at their homes or other suitable places and Government officials to display the flag on all Government buildings on May 22 of each year.

Presidential proclamations and other recognitions of National Maritime Day may be found at this site: http://www.usmm.org/md/maritprocs.html.

The merchant marine and American shipyards were crucial to victory in World War II. Then, as now, the United States Armed Forces could not fight a war overseas without the merchant marine and commercial ships to carry the tanks and torpedoes, the bullets and the beans. In World War II the ships also carried troops across the ocean. Merchant mariners and their shipmates of the Navy Armed Guard sailed across the Atlantic, the Pacific, through the Indian Ocean, across the Arctic Circle to Murmansk. They carried nearly 270-billion long tons of cargo–the average rate of delivery in 1945 was 17-million pounds of cargo every hour. They had been the first to go to war; merchant ships were being captured and sunk even before the United States officially entered the war. And they were the last to return; it was ships sailed by merchant mariners that brought the GIs home.

None of them had to go sea. They were all civilians, and they could have had other jobs in the booming wartime economy. Yet they went. Some were in their seventies, some were in their teens. 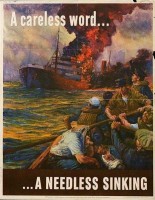 It was dangerous work. Nearly one in 30 of those who served in the merchant marine did not return. More than 6,000 American seafarers and more than 700 U.S. merchant ships fell to enemy action. No branch of the Armed Forces, save the Marines, suffered a higher casualty rate. None suffered a higher death rate. There are many good sources of information on the role of the merchant marine in World War II. One such web site is http://www.usmm.org/.

A classic book on the subject is A Careless Word. . .A Needless Sinking, by Captain Arthur R. Moore, published in 1983. A more recent book is Forgotten Heroes, by Brian Herbert, published in 2004. A more offbeat account of service in the merchant marine in World War II, is Woody, Cisco, and Me, an account of author Jim Longhi’s service with folksingers Woody Guthrie and Cisco Houston.

“When final victory is ours, there is no organization that will share its credit more deservedly than the Merchant Marine.” – General Dwight D. Eisenhower” 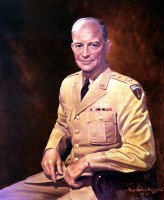 Maritime Administrator David Matsuda on May 19th honored the memory of Richard Oliver Kelleher during the U.S. Department of Transportation’s National Maritime Day observation on May 19th. Administrator Matsuda presented six posthumous awards to the family of Kelleher, whose death at sea during World War II symbolized the sacrifices of all U.S. merchant mariners. Accepting the awards was Kelleher’s brother, Herb Kelleher, founder of Southwest Airlines.

Richard Kelleher, a fireman-watertender, was just 19 years old when he died while serving onboard the tanker SS PATRICK J. HURLEY. The vessel was torpedoed on Sept. 12, 1942 by a German U-boat. Kelleher was one of 13 crew members lost along with the captain and four Navy men. 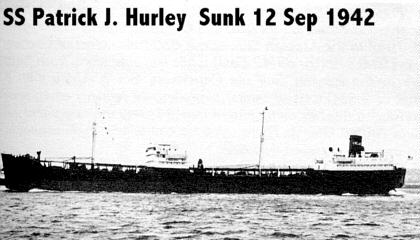 “With gratitude for their courage in times of great danger, we honor Richard Kelleher and all mariners who serve their country in war and peace,” said U.S. Secretary of Transportation Ray LaHood.

“Richard’s desire to serve at a time when our country needed him most is an inspiration to us all,” said Administrator Matsuda. “His story is an example of the courage and commitment to serve that still exists in the men and women who go to sea today.”

By all available records, the U.S. Merchant Marine suffered the highest rate of casualties of any service in World War II with 1,554 ships sunk due to war conditions. Hundreds of other ships were damaged by torpedoes, shelling, bombs, kamikaze attacks and mines.

In spite of their service and their sacrifices, merchant mariners were not accorded veterans’ benefits, and for many years were excluded from celebrations of Veterans’ Day, Memorial Day, and other days recognizing members of the Armed Forces. One merchant marine veteran who felt the exclusion very keenly was Walter Oates, who became Public Affairs Officer at the Maritime Administration. The Maritime Administration is the successor agency to the War Shipping Administration, which oversaw the shipbuilding and merchant marine operations in World War II. Mr. Oates was a wartime graduate of the U.S. Merchant Marine Academy at Kings Point, the only one of the federal service academies to send its students into war before graduation. One hundred forty-two of those students were killed in the war, and one of them had been Mr. Oates’s roommate.

In 1970, at the instigation of Mr. Oates, the Maritime Administration sponsored an observance of Maritime Day, a solemn ceremony honoring veterans of the merchant marine, and those who gave their lives in service to the United States. That observance has been held every year since then.

After a long court battle, merchant marine veterans were accorded some rights and privileges of veterans on January 19, 1988. Ten years after that, in 1998, in recognizing veterans from the Persian Gulf War, Congress included more rights and privileges for veterans of the merchant marine. The U.S. Navy Memorial in Washington, D.C., dedicated in 1987, integrates recognition of the U.S. Merchant Marine: www.navymemorial.org. At the dedication of the World War II Memorial in Washington, D.C., in 2004, Maritime Administrator William G. Schubert represented the merchant marine as chief of service. The flags at the entrance of the World War II Memorial have on them the seals of five services: the Army, the Navy, the Marine Corps, the Coast Guard, the Army Air Corps, and the United States Merchant Marine. More about the National World War II Memorial may be found at http://www.wwiimemorial.com.

Today, Maritime Day is observed in a variety of ways. Many ports have open houses and special celebrations. Propeller Clubs all over the United States hold special luncheons. At Merchant Marine Memorials, such as the one in New York City, and the one in San Pedro, California, memorial observances are held. In November 2005, the U.S. Conference of Catholic Bishops voted to make National Maritime Day a Day of Prayer and Remembrance for Seafarers and People of the Sea. National Maritime Day is a day to pay special tribute to the merchant marine and to the benefits that the maritime industry provides this country and to all who live here.

National Maritime Day, 2012
By The President Of The United States Of America 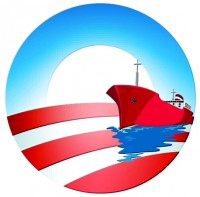 For 237 years, the men and women of the United States Merchant Marine have risen to meet our country’s call. They have strengthened our economy and our security in times of calm and conflict, connecting our service members to the supplies they need and transporting our exports into the global marketplace. On National Maritime Day, we pay tribute to all those who have served and sacrificed on our waterways and around the world.

From privateers who bravely fought for American independence to mariners who have supported our Armed Forces for over two centuries, the United States Merchant Marine carries forward an enduring legacy of service to our Nation. In the War of 1812, mariners put their lives on the line to preserve our young Republic, engaging British warships with sloops and schooners off our Atlantic coast. During World War II, they executed perilous transits to support our troops in combat. And throughout the 20th century and into the 21st, Merchant Mariners have contributed to the defense of our Nation by transporting essential cargo to ports across the globe. Their commitment has helped deliver us through periods of conflict, and their service will remain a critical asset to our security in the years ahead.

Our maritime industry also sustains the robust domestic and international trade networks that power our economy. As we open up new markets for American exports and support our businesses here at home, the United States Merchant Marine will continue to play a vital role in driving progress and prosperity in communities across our country. Today, we commemorate that important work, and we honor the mariners who dedicate their lives to seeing it through.

The Congress, by a joint resolution approved May 20, 1933, has designated May 22 of each year as “National Maritime Day,” and has authorized and requested the President to issue annually a proclamation calling for its appropriate observance.

IN WITNESS WHEREOF, I have hereunto set my hand this twenty-second day of May, in the year of our Lord two thousand twelve, and of the Independence of the United States of America the two hundred and thirty-sixth.