Clarksville, TN – Recently resigning from teaching at Vanderbilt University where she taught Italian, Women’s Studies, English and Humanities, Tracy Barrett can now devote her time to creating more children’s and young adult books. Her scholarly interests resulted in her Bachelor’s degree in Classics-Archaeology from Brown University and a Master of Arts and Ph.D. In Medieval Italian Literature from the University of California at Berkeley.

A grant from the National Endowment for the Humanities to study medieval women writers led to the writing of her award-winning young-adult novel, Anna of Byzantium (Delacorte). Her most recent publications are King of Ithaka, a young-adult novel based on Homer’s Odyssey; and the fourth book in The Sherlock Files, The Missing Heir (both Henry Holt). In September, Harcourt will publisher her young-adult retelling of the myth of the Minotaur, Dark of the Moon.

Her comments to writers at the Clarksville Writers’ Conference were based on first hand knowledge of the subject. Tracy Barrett has published 19 books, 10 of which are nonfiction. It takes about three years from the time she completes her manuscript until the book appears in print.

Here’s a bit of what she had to say:

Writers work and, therefore, should be paid for their work. Ms. Barrett feels that no writer should self-publish. When you sell a book to a publisher, you receive an advance and the agent receives a part of it.

Her main field of interest in writing is through historical fiction where she fills in the emotional lives of her characters based on best research. She feels that you should present your work correctly and attempt to find the right publisher.

“Luck plays a great role in getting published,” she said. The odds of getting published are not good. Every year about five- to six thousand books for young people are published. No one knows how many books are submitted because some people sent to multiple publishers. It is estimated that about 100,000 books are submitted but no one knows for sure. In spite of these odds, there are still people who send their manuscript without benefit of an agent and can get published the first time they submit.”

“Always send a cover letter with your book and refer to the fact that you met the agent or publisher at a former time (if you have done so),” she advised. “I had 24 rejections for my second book before I found the right editor.” Ms. Barrett had formerly believed that after she had published one book, it would be easy to have her second published; it didn’t happen.

Some of the subjects she suggested for books for middle school and older children are school, drugs, bullying, first love and adventure. “Spend time with children and teenagers and learn what they are interested in, how they talk, and what doesn’t work for them,” she said. “Know what’s in with your readers. Kids don’t know Debbie or Susan these days; those names are from the past.”

Ms. Barrett said that books filled with current slang will be old in the near future and will lose their appeal for kids. One of her friends who writes spends some time in the Gap overhearing what kids are saying to each other as they shop; she keeps up with current slang that way.

The reader has to care about the characters; whether that’s the good guy or the bully, they have to seem real. You need to read your work out loud so that you can hear how your style is working or failing. Then you revise. Ms. Barrett also advised writers to join a writers’ group so that you have immediate feedback from others. Also, if you are writing for kids, have your own children or ones you know check your manuscript to see if it works for them. 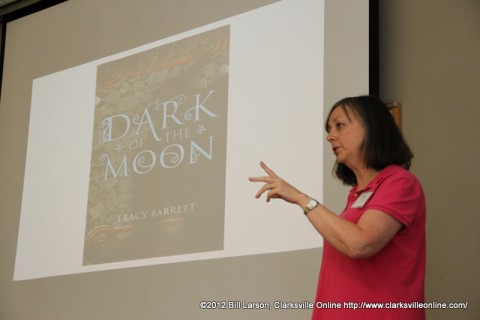 One book that she advised everyone to read is The Lovely Bones (by Alice Sebold) about a murdered girl who is the central character even though she is involved from beyond the grave.

Follow the lead of Stephen King, she advised, by showing a sinister looking house with weathered paint and broken out windows rather than writing, “It was a spooky old house.” Use metaphors and similes so that readers decide for themselves, she insisted.

As Mark Twain said, “Bring her on and let her scream!”

One thing to keep in mind is that boys don’t usually read books that look like they are for girls because they are embarrassed. Most publishers won’t print a pink cover or one covered with hearts on a book for adolescents. Also, 15-year-olds don’t read books about 12-year-olds.

A former rule was that you couldn’t switch from first- to third-person in the same book, but kids are more accepting of that now because of television programs that do this. You can change person but it has to be done very carefully as E. B. White did in Charlotte’s Web (told for the most part from third person but switches to first when Charlotte dies.

Basic rules of submitting one’s manuscript are to type double-spaced on plain white paper and don’t find an illustrator yourself. Only after you have a contract can you possibly suggest an illustrator and then rarely does the publisher take your suggestion because he has a stable of illustrators he knows are reliable and can do the job.

“Only on my first book, Anna of Byzantium, did my cover feature an oil painting,” she revealed. “She did an excellent job of presenting clues in the illustrations.”

Children’s Writer’s and Illustrator’s Market (published by Writers Digest) lists which publishers accept submissions from agents only and whether they want the first three chapters or a synopsis; follow the instructions or you are wasting your time and postage. Most agents now read submissions on e-mail on their Kindles on the train as they are riding home because that is their “spare time.”

Young adult books vary from 30,000 to 80,000 words but there is still some flexibility in these numbers.

In answer to the question, “Do I need an agent?” the answer was a definite “Yes if you write fiction!” Ms. Barrett said that more publishers are requiring that all submissions come from an agent, your contract is much better when negotiated by an agent, you get a better advance and royalties, and your agent is the one who calls in case the checks start getting slow. 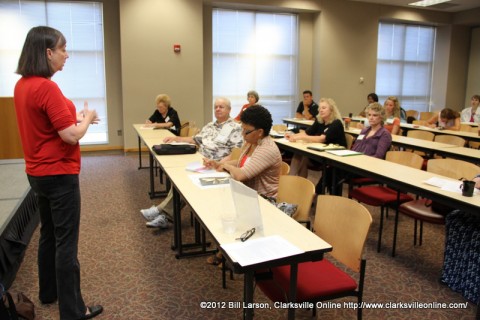 She said that nonfiction writers do not have to have an agent.

You get an agent by word of mouth recommendations and by meeting them at writers’ conferences. Then you write to the agent stating, “I met you at the …….conference” or you address a similar letter to an editor you have met this way.

Another way of getting known is by winning writing contests. One writer won a contest she learned about on a Cheerios box!

Ms. Barrett told writers in conclusion to listen to advice and then do what’s best “for you. You don’t have to write every day but you have to think about writing every day. Insomnia is the writer’s best friend. Write what you know about and put what you feel emotionally into your words.”

“The editor is not your enemy. You don’t have to write ‘copyright’ on your work; these people don’t have time to steal your work and wouldn’t if they did.

“Don’t pay to be published unless what you say has limited appeal. This is a job and you should be paid!”

You can visit her at www.tracybarrett.com.